Difference between revisions of "Laam caau" 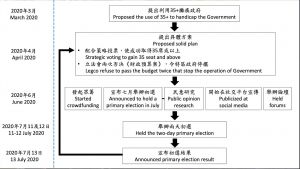 Cantonese term (pronounced "lahm tsow"), a combination of "embrace" and "fry," referring to a strategy invented and popularized during the 2019 Hong Kong protests, broadly meaning to force your opponent to suffer as much as you do. Coined by pro-democracy campaigner Finn Lau, who used the term as his username on Hong Kong social media platform LIHKG. Compared by some to a strategy of scorched earth or mutually-assured destruction. Prominent pro-democracy campaigners Joshua Wong and Alex Chow expressed the idea in a New York Times op-ed in August 2019 by referencing the famous "Hunger Games" line: "If we burn, you burn with us."

Proponents of the laam caau doctrine have called for Western governments to apply international sanctions on Hong Kong and revoke Hong Kong's special trade status as a separate economic entity from China. While acknowledging the painful effect of such policies on Hong Kong's economy, they argue that it is a sacrifice worth making.

Pro-establishment political parties in Hong Kong as well as Chinese state media have since co-opted the term to derisively refer to pro-democracy parties as the "laam caau faction."

In April 2020, Benny Tai, legal scholar and the brainchild behind Occupy Central with Love and Peace, the precursor to the 2014 Umbrella Movement, published an article titled "10 Steps to a Real Laam Caau" in Apple Daily (since deleted). Tai proposed a ten-step roadmap, beginning with the then-scheduled 2020 Legislative Council elections, that would ultimately lead to the international community applying sanctions on the CCP:

10 Steps to a Real Laam Caau

1. July-August 2020: The Hong Kong government issues widespread disqualifications to prominent pro-democracy activists, banning them from running in the 2020 Legislative Council election. Pro-democracy parties respond by filling their candidacies with "Plan B" candidates.

2. September 2020: Outraged at the disqualifications, a large voter turnout in the Legislative Council elections leads to the election of 35+ pro-democracy candidates, allowing the pan-democratic camp to achieve a legislative majority in the 70-person chamber.

4. October 2020-early 2021: During this time, all budget proposals submitted by the government between October 2020 and April 2021 will be rejected by the Legislative Council.

9. Post-December 2021: The state of emergency leads to an intensification of street protests, including a general strike that brings Hong Kong to a standstill.

A plan known as the "35-plus strategy", drafted by Tai a month before his "10 Steps to Laam Caau" article was published, provided a roadmap for the pro-democracy camp to gain a majority in the Legislative Council, the second step of the 10-step plan. The "35-plus strategy" was embraced by pro-democracy politicians looking to run in the September 2020 Legislative Council elections. On July 11 and 12, 2020, Tai and former lawmaker Au Nok-hin, along with pro-democracy group Power for Democracy, organized an unofficial primary election for pro-democracy candidates. More than 600,000 people participated in the primary. At the end of July, however, the Hong Kong government postponed the election for a year citing "virus concerns."

While Tai predicted that China would apply its National Security Law to Hong Kong, he failed to imagine that Beijing would announce and implement a bespoke Hong Kong National Security Law months earlier than predicted, on July 1, 2020. On January 6, 2021, 53 people were arrested for "subversion" under the National Security Law, including Tai, Au, and every single pro-democracy candidate who ran in the July 2020 primary. The Hong Kong Police's National Security Department cited Tai's "10-step plan for laam caau" as evidence of a plot to paralyze and overthrow the government, despite his roadmap being grounded in existing legal provisions within the Basic Law. Of the 53, 47 were subsequently charged on February 28, 2021, and currently await trial. If convicted, they face maximum sentences of life imprisonment.

"Laam caau" has continued to influence electoral reforms for Hong Kong announced during the 2021 "Two Sessions." In a speech on February 21, 2021, Xia Baolong, Director of the Hong Kong and Macau Affairs Office, announced that Hong Kong people must be "patriots" to be eligible for public office. Candidates who supported the laam caau doctrine were among those singled out as unpatriotic, and thus ineligible for office.