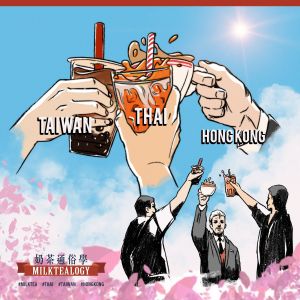 The Milk Tea Alliance is an online solidarity movement between pro-democracy supporters in Hong Kong, Taiwan, Thailand, and Myanmar. It was started in 2020 by activists involved in social movements across East and Southeast Asia, but has since expanded to encompass the netizenry of other countries in Asia and beyond, including Nepal, Myanmar, and India. Well-known youth activists including Joshua Wong in Hong Kong, Bunkueanun “Francis” Paothong in Thailand, and others have lent their support to the alliance, as have politicians in Taiwan and India.

The #MilkTeaAlliance hashtag began its life as a meme in response to the harassment of a young Thai actor and his girlfriend by Chinese nationalists. Vachirawit Chivaaree, the star of a Thai drama popular in China, and his girlfriend Weeraya "Nnevvy" Sukaram were harassed by the Fifty Cent Party and little pinks after they discovered content on the pair's respective social media that may have suggested Hong Kong and Taiwan were independent countries. Twitter users in Thailand, Taiwan and Hong Kong defended the couple under the hashtag #nnevvy, before eventually coming together under the #MilkTeaAlliance banner.

The popularity of the hashtag has fluctuated based on political activity in the alliance's regions. In Thailand in 2020, pro-democracy demonstrators chanted "Free Hong Kong" during their anti-government protests. In Taipei, activists have gathered to show support for the 2020-2021 Thai protests. The hashtag trended in June 2020 amid calls to boycott Disney's Mulan over the lead actor's pro-Hong Kong police stance, and the company's decision to film large parts of the movie in Xinjiang.