Difference between revisions of "Moderate level of corruption" 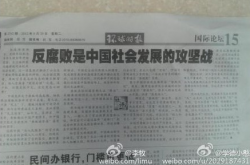 The editorial “Fighting Corruption is a Crucial Battle for Chinese Society” in the print edition of the Global Times.

On May 29, 2012, the Global Times published an editorial titled “Fighting Corruption is a Crucial Battle for Chinese Society” (反腐败是中国社会发展的攻坚战). It stated that the “public must understand... the objective fact and reality that China has no way of entirely suppressing corruption without sending the whole country into pain and confusion.”

The suggestion that Chinese citizens should be willing to accept a degree of corruption caused an rush of criticism online, which only intensified when QQ.com reposted the article under the headline “China Must Permit Moderate Corruption, the Public Should Understand” (要允许中国适度腐败 民众应理解).

A full translation of the article is provided by China Media Project.