In Mandarin, “monkey-snake” (猴蛇 hóu shé) sounds the same as the word for “mouthpiece” (喉舌 hóushé). A member of the pantheon of mythical creatures, the monkey-snake represents the official mouthpiece of the Chinese government. Following is a fictional account of the monkey snake, as originally seen on human rights activist Yunchao's (now defunct) blog:

Monkey-snake: mammal, developed brain, human-like face. Has the head of a monkey and the body of a snake. Rectal area also resembles a face. Skilled at imitating human language, but usually lies. First appeared approximately 100 years ago in Russia. While once common in much of Eastern Europe, Northeast Asia, Africa etc., it is now only found in Northeast Asia and South America. While there are many varieties of the species, the kind found in China and North Korea is considered to be the most authentic. Because the species is somewhat rare, Chinese scholar Ling Cangzhou proposed that April 1st (April Fools Day) of every year be designated “Monkey-Snake Day” to promote the recognition and protection of the species. 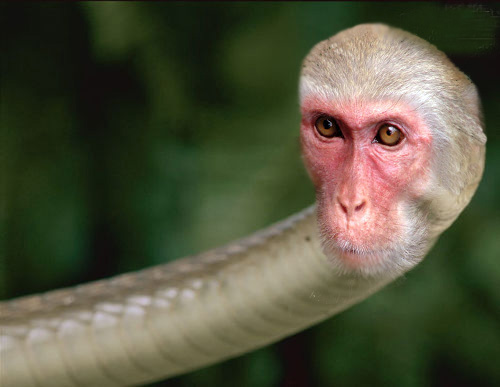