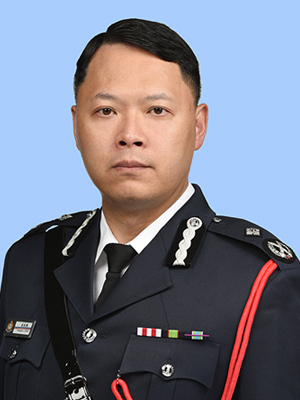 Frederic Choi Chin-pang, Hong Kong Police Force Director of National Security, Who Was Cleared of All Wrongdoing After Being Found in an Illegal Massage Parlor (Source)

"National Security Law for Ordinary People, Ordinary Law for National Security People" is a translated phrase from a popular social media post published in May 2021, written to satirize the asymmetric due process experienced by pro-government and pro-democracy figures in Hong Kong.

On May 12th, local media reported that Frederic Choi Chin-pang, a senior officer in the Hong Kong Police Force's National Security Department was placed on leave after being caught in a police raid on an unlicensed massage parlor in the city. Prominent pro-establishment politicians jumped to his defense, calling on the public not to jump to conclusions and reminding people that common law principles dictate that a defendant is innocent until proven guilty. By May 18th, Choi was cleared by the police force of illegal or immoral conduct, while six women also caught in the raid were arrested.

Critics pointed out the hypocrisy of Choi's defenders, in rushing to remind people that defendants are "innocent until proven guilty" at a time when dozens of pro-democracy activists are being held in prison for months on national security charges even before their trials have even begun. There are numerous other examples of unequal commitments to due process and asymmetric penalties for pro-democracy and pro-establishment defendants in Hong Kong.

Critics have also pointed to increasingly heavy sentences for pro-democracy protestors charged with unauthorized assembly, often justified by magistrates as necessary for a "deterrent" effect. They decry the comparatively light sentences handed to individuals who have attacked pro-democracy supporters, such as a man who received just 45 months for stabbing three people at a Lennon Wall in 2019. The judge offered his sympathies to the stabber, likening the pro-democracy protestors to a "terrorist army."