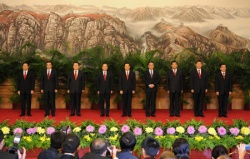 The term "nine presidents" was used by former Chinese leader (and current dissident), Bao Tong, to draw attention to the fact that China is led by nine people who effectively share power as presidents, and that this structure lacks a constitutional foundation. While there were nine members of the Standing Committee when Bao coined the term, as of the 18th Party Congress the there are only seven.