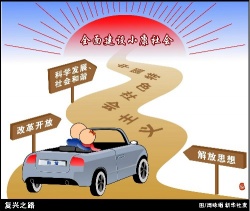 The “preliminary stage of socialism” is a rhetorical device which allows for a redefinition of orthodox Marxist theory, enabling the government to undertake whatever economic policies are needed to develop into an industrialized nation. It permits the reform faction to demonstrate loyalty to Chinese communist ideology while introducing capitalist measures to the centrally-planned economy. Socialism with Chinese characteristics goes hand-in-hand with this ideological concept. Wen Jiabao penned the article Our Historical Tasks at the Preliminary Stage of Socialism and Several Issues Concerning China’s Foreign Policy in 2007.