This is a parody of Mao Zedong's famous exhortation to “serve the people.” The original phrase is reproduced in Mao’s calligraphy above many government buildings and in front of the entrance to Zhongnanhai, the complex that houses the Central People’s Government and the Communist Party of China.

In Chinese, renminbi (RMB) is literally, "the people's currency." By adding one extra character, the phrase "serve the people" is transformed into "serve the renminbi" or "serve in order to get renminbi." The parody strikes a chord with those who feel that officials are more concerned with accumulating personal wealth than they are with serving the people. 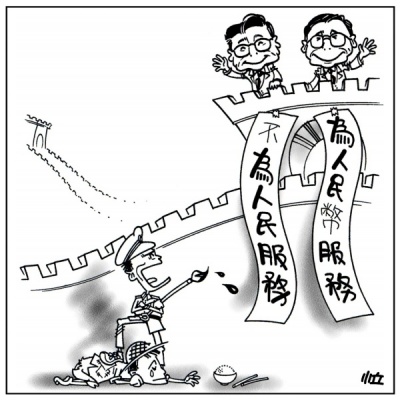 "Don't serve the people, serve for renminbi." The two figures above the banners look like Hu Jintao and Wen Jiabao.

"Serve for renminbi"
Retrieved from "http://chinadigitaltimes.net/space/index.php?title=Serve_the_renminbi&oldid=702"