"Those with ulterior motives" is a phrase often used by the government and the official media to describe instigators of social unrest.

Here is an example of how the phrase is used in Chinese:

"Whenever there is a mass incident, some government agencies will always issue statements to the effect that people who 'didn't understand the actual situation' were incited by 'those with ulterior motives.'"
每有群体性事件，一些政府机关的文宣必定是“不明真相”的群众是被“别有用心”的人蛊惑的。

Netizens are often irked by the phrase because it suggests that those who are critical of the government (because of pollution, illegal housing demolitions, corruption, etc) have no legitimate grievance and are only lashing out against the government as the pawns of others with mysterious ulterior motives. 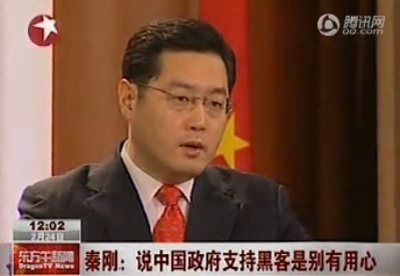 Qin Gang: Those who claim that the Chinese government supports hackers have ulterior motives.
Retrieved from "http://chinadigitaltimes.net/space/index.php?title=Ulterior_motives&oldid=611"