Literally “his mother’s,” tamade is a common swear word. Like “fuck”, the phrase has a sexual connotation, though it is less harsh than its English counterpart and has a broader range of uses. Depending on the context, it can be translated as almost any English swearword, though it often appears as WTF.

A very notable use of the phrase appeared in the July 26, 2011 edition of Hong Kong’s Apple Daily shortly after the Wenzhou train accident. The front page headline read, “Clearing the Tracks, Not Saving Lives; WTF!“” 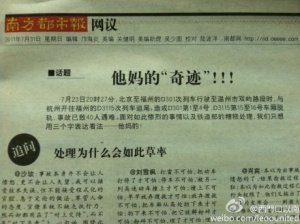