This phrase comes from the 11th National Games held in October 2009. Before the diving competition had ended, a coach named Ma Ming claimed that all the gold medals for diving had already been determined by Zhou Jihong, Captain of the State Diving Team. He also correctly predicted the next four gold medal winners.

Reporters then asked Zhou whether or not the medals had been predetermined. Instead of directly answering the question, she shot back, “Which work unit are you from?” (Asking one's work unit is a loaded question as it immediately creates a power dynamic between the person who asks and the person who answers.) The condescending tone of her question and her glib denial caught the interest of netizens who reposted her phrase on the web. 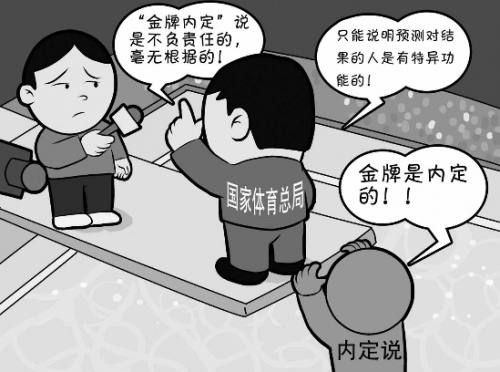 Person on diving board who represents the State General Administration of Sports is saying "It is irresponsible to speak of medals being predetermined; it's completely without evidence. Consistent with predictions, those who won just had extraordinary abilities." The figure holding down the diving board represents "those who think the medals were fixed." He is shown saying, "The gold medals were fixed!!"
Retrieved from "http://chinadigitaltimes.net/space/index.php?title=Which_work_unit_are_you_from%3F&oldid=480"