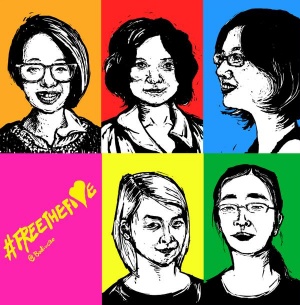 The Feminist Five are Li Maizi (Li Tingting), Wei Tingting, Zheng Churan, Wu Rongrong, and Wang Man, a group of women's rights activist that rose to international prominence in 2015 after being criminally detained for planning a public sexual harassment awareness campaign. According to author and expert on women's issues in China Leta Hong Fincher, prior to their arrests the five "were completely unknown outside China. Had the women not been detained, their activities marking International Women’s Day likely would have passed without much attention. Yet in cracking down on these largely anonymous young women, the Chinese government itself provided the spark for the creation of a powerful new symbol of feminist dissent against a patriarchal, authoritarian state: China’s 'Feminist Five.'" The women's activism helped to pave the way for a Chinese version of the #MeToo campaign that swept the world in 2017, but met with significant cultural and political hurdles in China.

The five, all members of the China Women's Rights Action Group, were among a group of at least ten women detained on March 6, 2015 for planning a campaign to hand out stickers at public transportation hubs in Beijing, Guangzhou, and Hangzhou to raise public awareness of sexual harassment in honor of International Women's Day. The stickers were to read "stop sexual harrassment, let us be safe," and "police, go arrest those who committed sexual harassment!" After several of the group were released, the five were placed under criminal detention on suspicion of "picking quarrels and provoking trouble," a nebulous charge that has in recent years been used frequently to detain activists, lawyers, and writers amid a widespread crackdown on civil society activism in China. Their detention came as part of Xi Jinping's crackdown on NGO and civil society activism, a broad campaign believed to be aimed at dissuading collective political action. Coming ahead of the 20th anniversary of the landmark U.N. World Conference on Women, held in Beijing in 1995, their detention became a symbol of the flaws of the U.N.'s "Beijing platform", and attracted a global #FreeTheFive movement calling for their release, with many activists across China publicly protesting for their freedom.

The five remained in detention for 37 days, and were released on bail on April 13, two days after U.S. Secretary of State John Kerry issued a call for their freedom. They were released under qǔbǎo hòushěn (取保候审), meaning that they would be subject to intense surveillance, restrictions, and further investigation for up to one year. Legal scholar Jerome Cohen has defined qǔbǎo hòushěn as "a technique that the public security authorities sometimes use as a face-saving device to end controversial cases that are unwise or unnecessary for them to prosecute." Human Rights Watch's Sophie Richardson praised the role that international and domestic protest played in their release.

Two years after her detention, Feminist Five member and prominent LGBT rights activist Li Maizi published an opinion article in The Guardian. In the essay, she tied the crackdown on women's rights activism in China to global anti-feminist backlash, and marked successes in the Chinese movement over the past two years—including the 2016 passing of China's first legislation against domestic violence, concluding, "The Beijing government continues to push back the boundaries of acceptable resistance to the point where there is little room left, but at least women’s issues are being discussed. That’s why there is hope for feminism in China." In a 2016 interview with China Change's Yaxue Cao, Li Maizi described her experience in detention in detail, and similarly expressed hope for both the LGBT and feminist movements in China, despite the troubling experience of the Feminist Five.