The Risks of Expanding Repression in China 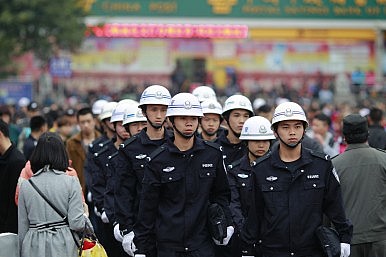 At the Lowy Interpreter, Human Rights Watch’s Maya Wang examines planned regulations of Chinese NGOs which would subject them to supervision by the Ministry of Public Security using “tactics more commonly reserved for a criminal investigation.” The proposals exemplify both a sustained campaign against Western influence and a narrowing of space for civil society within China, also illustrated by the recent detentions of five women’s rights activists, which has been a dramatic and unpredictable signature of Xi Jinping’s rule.

[… T]he lack of a national law governing these organisations, coupled with differences in attitudes towards NGOs by regional leaders, have afforded some leeway for those with creative strategies. It has been common for ‘sensitive’ NGOs – ones that actively campaign, or work on human rights or civil liberties – to register as a business to bypass the wary eyes of the state, or not register at all. And over the years, some international funding to these organisations in China, and the running of certain foreign organisations, has been tolerated.

Many of China’s civil society organisations have long relied on outside funding. It has been especially valuable for sensitive NGOs. It is nearly impossible for them to access the few domestic funding sources available when they are not legally registered as a nonprofit, and when these sources tend to stay away to stave off official harassment. But with the dawn of the long-debated Foreign NGOs Administration Law, likely to be adopted this year, the funding lifeline that allowed more outspoken NGOs to operate will rapidly dry up.

[…] The draft law is another step towards the Chinese Government’s ‘differentiated management’ model of NGOs, in which domestic groups working on issues approved by the state, such as charities for people with disabilities, can register easily and are considered for increased state funding and support. But those engaged on rights or lobbying are stifled. The draft explicitly prohibits activities that ‘endanger…national security, unity and solidarity’ or that ‘go against China’s social morality’. These are vague terms, but ones frequently used to silence peaceful government critics and activists. [Source]

In a recent directive, top Communist Party and government officials called on party cadres and bureaucrats across the country to “make the construction of harmonious labor relations an urgent task,” to ensure “healthy economic development” and to consolidate the party’s “governing status.”

The policy paper was issued late last month and has circulated widely among Chinese labor scholars, lawyers and activists, who say it signals Beijing’s growing concern that festering labor tensions could soon threaten social stability or even weaken the party’s grip on power.

[…] While the opinion doesn’t offer any groundbreaking policy initiatives, it summarizes a slew of measures that many government and union officials have advocated in recent years, including promoting collective bargaining and improving workers’ legal protections and dispute-resolution mechanisms.

However, it doesn’t offer any role for civil society, an omission that analysts say likely reflects Beijing’s growing intolerance toward activism. Local officials have adopted increasingly aggressive tactics against labor unrest in the past year, arresting activists and workers, as well as deploying riot-control police to break up strikes. [Source]

At The Diplomat, Freedom House’s Sarah Cook argues that the tightening is likely to prove counterproductive:

The expanded crackdown has been effective at neutralizing some perceived threats to CCP rule. […] But such “victories” for the regime come with real costs to the party’s legitimacy and hold on power.

First, as repression and censorship expand, the dark side of the party-state is touching the lives of more Chinese citizens. For example, content restrictions that were once experienced only by a small cadre of professional journalists are now a daily reality for tens of millions of internet users. Meanwhile, intrusive regulations that limit popular but apolitical activities – enjoying TV shows like The Big Bang Theory, using Google’s e-mail service, or dancing in public for exercise – provoke public ridicule and resentment. As restrictions increase, Freedom House research indicates that even some security personnel and censors have quietly grown more sympathetic to victims of political and religious persecution.

Second, by harshly punishing even those activists who try to work within the existing political and legal system, the CCP leadership is signaling that such efforts are futile, and that incremental change is not possible. This risks increasing the number of people who see direct confrontation and the end of one-party rule as the only solution. […] [Source]

For example, the pro-Xinjiang independence World Uyghur Congress described the harsh sentencing of moderate scholar Ilham Tohti last year as “a clear signal that Uyghurs hoping for change through legal and other rational channels will be thoroughly disappointed. Equality and dignity can only be grasped by casting off the Chinese regime.”

Cook continues: “In fact, by expanding the targets of repression, the Xi leadership is engaging a risky departure from the party’s own survival strategies.” These strategies’ possible failure became a contentious issue last month after American China scholar David Shambaugh suggested that “the endgame of Chinese communist rule” has already begun. “I believe that repression is seriously stressing an already broken system and could well accelerate its collapse,” he subsequently explained to The New York Times, although “even if they lightened up on the repression, the other elements affecting the party, economy and society are already hemorrhaging to the point that they may not be able to reverse or halt the slide.” Civil society scholar Yiyi Lu, on the other hand, has suggested that Xi’s broadening of the Party’s habitually “selective authoritarianism” might help him achieve his all-consuming goal of ensuring its survival.