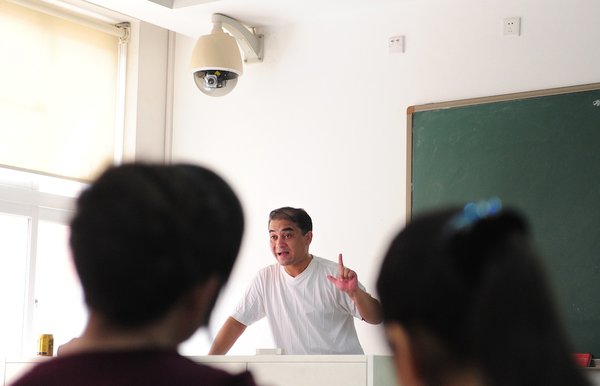 The punishment was among the harshest that Chinese officials have imposed on a political dissident in recent years. Officials announced Ilham Tohti’s sentence after holding a two-day trial in Urumqi, the regional capital, that ended last Wednesday. Mr. Tohti was taken by the police last January from his home in Beijing, where he teaches economics at Minzu University, and was brought to Xinjiang to be held here and charged with separatism, to which he pleaded not guilty.

Officials in Xinjiang are grappling with a surge in violence between the mostly Muslim, Turkic-speaking Uighurs and the Han, the dominant ethnic group in China. Communist Party leaders have long said that Xinjiang is in a battle with the forces of terrorism, separatism and religious extremism and that all steps must be taken to stamp out the insurgency. But foreign scholars, diplomats and human rights advocates denounce China’s hard-line policies against the Uighurs, and they say the harsh measures that China has taken against moderates like Mr. Tohti will only lead to further radicalization of Uighurs and a rise in violence, including the kind encouraged by foreign jihadist groups.

[…] Prosecutors presented eight main arguments in trying to prove Mr. Tohti guilty, Mr. Li said. One was that Mr. Tohti had “internationalized” the Uighur issue by giving interviews to foreign reporters and had translated foreign articles and essays about Xinjiang to be posted on Uighur Online. [Source]

Xinhua offers more details of Ilham Tohti’s alleged crimes, including the accusation that he “bewitched and coerced young ethnic students to work for the website and built a criminal syndicate.” Seven of his students have also been detained and are likely to face trial.

Ilham Tohti has long opposed Xinjiang independence. In a 2011 essay, he wrote of his determination to promote harmony between Han and Uyghurs in order to avoid “ethnic conflict and killing, political unrest […] turmoil and division” in China. A spokesman for the pro-independence World Uyghur Congress told The Financial Times after the sentencing that “China has issued a clear signal that Uighurs hoping for change through legal and other rational channels will be thoroughly disappointed. Equality and dignity can only be grasped by casting off the Chinese regime.” In an interview with Ian Johnson for The New York Review of Books (via CDT) this summer, scholar Wang Lixiong predicted that clearing out the ideological middle ground might be precisely the authorities’ goal: “The only conclusion is dark: it’s that they don’t want moderate Uighurs. Because if you have moderate Uighurs, then why aren’t you talking to them? So they wanted to get rid of him and then you can say to the West that there are no moderates and we’re fighting terrorists.”

Wang and others reacted to the verdict on Twitter:

Technically, sentences of “no fixed duration” are different from “life imprisonment.” In theory, potential for commutation/reduction/parole.

Those sentenced to life eligible for sentence reduction to fixed term after two years, must serve minimum 13 in prison.

Precondition for sentence reduction is evidence of repentance or meritorious service. Obviously, challenge in political cases.

Ilham's sentence shocking, a sigh that Chinese leadership now has no tolerance 4 criticism of its Xinjiang policy, even in the mildest form

Hard not to see life sentence for #ilhamtohti as death knell for peaceful, constructive criticism.

And from Ilham Tohti’s lawyer and daughter:

@liu_xiaoyuan: I received a call from the family, who said the sentencing just ended. Ilham was sentenced to life imprisonment for separatism, with confiscation of all assets as an additional punishment. He said a single sentence rejecting the judgment and protesting before bailiffs led him out of the courtroom.

@JewherIlham: I also reject it! I protest!

Read more on Ilham Tohti and Xinjiang via CDT.

Updated at 15:18 PDT: The White House, U.S. State Department, and E.U. have all condemned the verdict. Simon Denyer’s report for The Washington Post includes more reactions to the sentence, and a message from Ilham Tohti:

“This is so thorough and transparent a miscarriage of justice as to take one’s breath away,” said Elliot Sperling, an expert on Tibet at Indiana University and friend of Tohti’s. “By no stretch of the imagination — even the authoritarian imagination — could this be considered a fair trial. The severity of the sentence stands in inverse proportion to the substance of the charges.”

[…] Mo Shaoping, a Chinese human rights lawyer, said the verdict would only exacerbate the conflict in Xinjiang, and was part of a broad crackdown not only on ethnic issues but on freedom of expression generally.

[…] “Tohti asked me to deliver a message before the trial, that no matter how heavy the sentence he’d get, he hopes that his people and his family won’t have hate in their heart,” Li [Fangping, Ilham Tohti’s lawyer] said, speaking by telephone from Urumqi. “He said he would continue to advocate for communication and understanding between people, but that he’d also continue to defend the rights of the Uighur people.” [Source]

The imprisonment of Mr Tohti, and the confiscation of all his assets, have come amid a broader crackdown on activists, intellectuals and lawyers since Xi Jinping became China’s leader in late 2012. Though few outside China had heard of Mr Tohti, and even fewer would have viewed Mr Tohti as much of a threat to Communist Party rule, his sentencing will almost certainly make him an enduring international symbol for human rights activists. Another intellectual sentenced to a lengthy prison term, Liu Xiaobo, was awarded the Nobel Peace Prize in 2010. Wang Lixiong, a dissident writer, tweeted after Mr Tohti’s sentencing […] that the authorities had made him a “Uighur Mandela”.

Mr Tohti himself had long expected this day to come. In the video interview below, conducted in November 2009, he talks of being prepared for a long term in prison, or even a death sentence. “That just might be the price our people have to pay,” he says. “Though I may have to go, perhaps that will draw more attention to the plight of our people. People will think more about it and perhaps more people will know about me.” [Source]

The interview is conducted by Tibetan writer Woeser, of whom Ilham Tohti has been described as a Uyghur counterpart. She highlighted the sacrifices he had already made for his advocacy, which included giving up meat and his car because of financial hardship.

Woeser: A few years ago you were one of the wealthiest Uyghurs in Beijing, but now it’s said you’re one of the poorest. That’s such a dramatic rise and fall for a person to go through, both financially, but also politically and in terms of your safety. Now that you’re in such a precarious situation, what do you make of it all?

Ilham Tohti: I think these problems just need to be faced. As you well know, if you’re that sort of person, with ideals like that, you can easily imagine … [the consequences]. But initially, I didn’t give so much thought to it. I knew at the outset I’d face certain setbacks, maybe even being put in jail for 10 or 20 years. I thought, I can handle that, I’ve always been prepared for that.

[…] Whatever the government decides to do, I’m ready. We already lost our money when they froze our accounts. […]

[…] I think for a nationality there comes a point, and in this country with the way things are, where you can go to jail for what you say, for running a website, for just speaking the truth … which for me would be an honor. As I’ve said before, to trade my humble life to call for freedom … gladly, I’d be proud to do it. [Source]

Like Ian Johnson at The New York Review of Books (via CDT) on Monday, The New York Times’ Andrew Jacobs also turned to old interviews with Ilham Tohti. In excerpts at The Times’ Sinosphere blog, the scholar discussed the pressure placed on his family in an attempt to silence him, the deficiencies of both Chinese and Western reporting on Xinjiang, his relations with the Beijing and Xinjiang security forces, and the dangerous response to China’s heavy-handed policies in the region. Jacobs introduced the post with a comment on Ilham Tohti’s ubiquity in foreign news reports, which was a major factor in his prosecution.

In recent years, as China has been buffeted by surging violence in the far western region of Xinjiang, foreign journalists seeking analysis from local scholars relied on one man to make sense of news events: Ilham Tohti, the Uighur economics professor who could always be counted on to give an insightful and spirited assessment of the central government’s latest development initiative in Xinjiang — or the most recent “strike hard” security clampdown. The reliance on one person was not ideal, but pervasive fear long ago persuaded other Uighur academics to keep their mouths shut.

I see that my people are changing. Separatism is continuing to strengthen. Many people have a separatist mentality now. It is much more prevalent since the 5 July incident [rioting in 2009 that left nearly 200 people dead in Urumqi, the regional capital].

Many problems are caused by the authorities, but I am also worried that many of my people are becoming extremists. It is not good. It threatens harmony and is detrimental to resolving Xinjiang’s problems. This country is bound to repress more people, and in the end, there won’t be any results. So we can only use peaceful means. [Source]