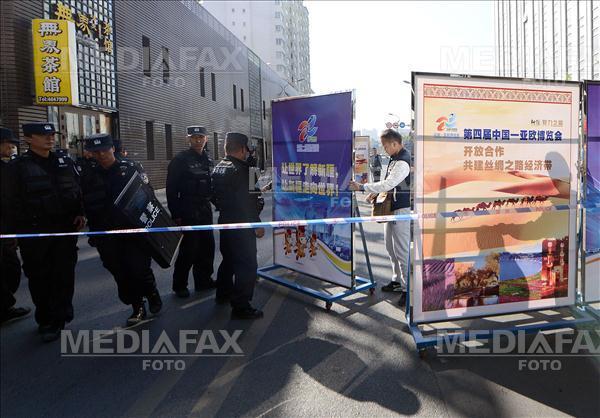 The separatism trial of Uyghur scholar Ilham Tohti began in Urumqi on Wednesday. AFP’s Tom Hancock reports that the prominent critic of Beijing’s policies in Xinjiang refuses to accept the charges against him.

Prosecutors will argue that Tohti’s writings on his website Uighur Online, and his lectures at the Minzu University in Beijing, show that he was a leading member of a “separatist criminal organisation”, according to his attorney Li Fangping.

[…] Separatism charges can carry the death penalty in China, but the wording of the indictment means life imprisonment is the heaviest sentence Tohti can face, said his lawyers – adding he has been denied food and kept in shackles during his detention.

“Ilham will not accept the charge,” said Liu Xiaoyuan, his second defence lawyer. “Looking at his articles and statements we haven’t seen anything which would constitute separatism.”

“A scholar expressing opinions on current events is not the same as separatism,” he added. [Source]

Hancock and AP’s Hélène Franchineau tweeted from near the courthouse as the trial got underway amid a heavy security presence.

At Urumqi's courthouse where Ilham Tohti's trial is held. Security tight, no one allowed near. 8 panels blocking view pic.twitter.com/XsGBaiYuMF

Beside being shackled and denied food, Tohti has reportedly not received photographs or warm clothes sent by his family, while specially relocated Han prisoners have been monitoring him on behalf of the authorities, verbally abusing him and in one case starting a fight.

Human Rights Watch issued a statement on Tohti’s trial on Monday, providing more information on the charges against him and arguing that his prosecution would only make tensions in Xinjiang worse. The group also posted a detailed timeline of the case.

“Tohti has consistently, courageously, and unambiguously advocated peacefully for greater understanding and dialogue between various communities, and with the state,” said Sophie Richardson, China director. “If this is Beijing’s definition of ‘separatist’ activities, it’s hard to see tensions in Xinjiang and between the communities decreasing.”

[…] “The long-term solution to Xinjiang’s unrest is not further repression, but greater understanding of Uighurs’ grievances and perspectives,” Richardson said. “If Tohti – a peaceful, articulate critic – is given a harsh sentence, what confidence can any Uighurs have that their very real grievances will ever get a hearing with Chinese authorities?” [Source]

Ilham Tohti’s views on Uyghur-Han relations are expressed in a 2011 essay, ‘My Ideals and the Career Path I Have Chosen,’ which was translated and posted at China Change in April. In it, he explicitly disavowed separatism and extremism, writing that “national pride runs deep within my veins” and that “I strongly believe that my efforts and inquiries will become part of China’s progress.”

[… H]aving witnessed a great number of cases of ethnic conflict and killing, political unrest, and failed social transformation during my extensive travels throughout Central Asia, Russia, and South Asia, my desire grew stronger and stronger to completely devote my energies to researching Xinjiang and Central Asian issues, so that tragedies  abroad won’t take place in China.

[…] I love my mother deeply, who suffered great hardships in raising me. I love my still impoverished and long suffering ethnic group. I love this land which has nurtured me. I earnestly hope my homeland can become as prosperous and developed as the interior of China. I worry about my homeland and my country falling into turmoil and division. I hope that China, having endured many misfortunes, will become a great nation of harmonious interethnic coexistence and develop a splendid civilization. I will devote myself to Xinjiang’s social, economic and cultural development, to the interethnic understanding, and to finding the way to  achieve harmonious ethnic coexistence amidst the social transformation today. These are my ideals and personal objectives, and the choices I have made have their roots in my family’s history; my upbringing; my mother’s teachings; and my education as well as personal experiences.

[…] As Xinjiang faces the danger of escalating ethnic conflicts, and discussions of ethnic problems tend to be radical, I believe that one of our most important tasks and missions is for us to use rational and constructive voices to compete against more extreme ones in the market place of ideas, moving social sentiments toward a more positive direction. [Source]

Ilham Tohti’s U.S.-based daughter Jewher Ilham, who has campaigned for her father’s release, discussed the charges against him with The Washington Post’s Simon Denyer:

In April, Jewher testified before the Congressional-Executive Commission on China about the constant harassment her father and their family have faced over many years. She told of how she came home one day to an empty house, to find that her father, stepmother and two young brothers had been sent away by the authorities to the island of Hainan: how one of her young brothers was prevented from registering at school and denied a passport in 2012, and how security personnel rammed her father’s car in 2013 and threatened to kill the entire family. Her stepmother has been put under constant surveillance at home, while Tohti’s eldest son, now 8, has become withdrawn and introverted, she testified. “Having witnessed our father being taken away, he now has nightmares.”

In a telephone interview from Indiana on Tuesday, Jewher called the charges against her father “ridiculous,” and completely out of character. While many parents in China hit their children to educate them, Jewher said he father had never hit her and didn’t believe violence could solve problems. “How could he advocate violence? He was very moderate, he would try to help people – he didn’t want people to fight.”

[…] If he truly wanted to advocate ethnic hatred, she argued, “why would he let me stay in a Chinese school [in Beijing], where all of my classmates, all of my friends were Han Chinese? He would have sent me back to Xinjiang.” [Source]