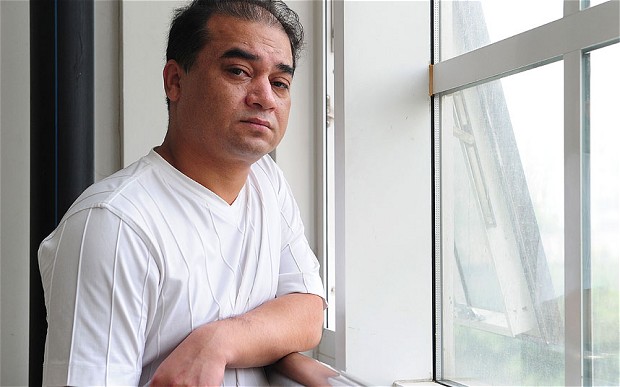 Uyghur scholar Ilham Tohti was detained in January and later charged with separatism for his work advocating on behalf of the Uyghur minority. Despite earlier concerns that he had been secretly tried without legal representation, his lawyer Li Fangping was recently allowed to meet with his client and confirmed that his trial has not yet been held. In the recent meeting with lawyers, Ilham Tohti contested the charges against him. Chris Buckley at the New York Times reports:

The meeting with his two defense lawyers brought the first word conveyed from Mr. Tohti since he was detained in January and arrested in February on charges of inciting separatism, an accusation condemned by international human rights groups and Chinese rights advocates. They have said Mr. Tohti advocated peaceful change in Xinjiang, the far-western region of China that has been increasingly torn by tensions pitting ethnic Uighurs, a Muslim Turkic-speaking people, against the government and China’s ethnic Han majority.

Mr. Tohti is adamant that the charges are spurious, said Li Fangping, one of his lawyers, who met with him for nearly five hours in a detention center in Urumqi, the regional capital of Xinjiang.

“He rejected the charges,” Mr. Li said in a telephone interview from Urumqi, where he had traveled from Beijing to seek a meeting with his client. “But he wasn’t aware of the specific police accusations against him, and only today did we show them to him.” Mr. Li explained that he and the other lawyer showed Mr. Tohti a news report with the charges that came out at the time of his arrest.

“After he read them, he was very angry,” Mr. Li said. “He said none of his words or deeds constituted the crime of separatism. He simply hoped that the interests of ethnic minorities and Han people could be brought together.”

Li Fangping also told reporters that Ilham Tohti had held a ten-day hunger strike to protest his treatment in detention, and was also denied food and held in leg irons. Michael Martina and Ben Blanchard at Reuters report:

Tohti’s lawyer, Li Fangping, said his client, despite being placed in leg irons for 20 days, maintained his innocence after months of incommunicado detention.

“Because he eats halal food there was a dispute. He went on a hunger strike for 10 days in January,” Li told Reuters by telephone from Xinjiang where Tohti is being held.

After a deadly attack at a train station in the southwestern city of Kunming in March, which the government blamed on separatist militants from Xinjiang, authorities denied Tohti food for another eight days.

“For eight days he didn’t eat anything. He lost 16 kilograms. On the tenth day he was given a bun. Restricting his food constitutes a form of abuse,” Li said, adding that he had worries about Tohti’s physical condition and that his state of mind was “very anxious”.

Since his detention, official media have linked Ilham Tohti’s work to violent attacks in Xinjiang, despite insistence by him and his supporters that his work is peaceful. As part of an ongoing crackdown on such attacks, the Chinese government has detained 380 people in Xinjiang Uyghur Autonomous Region in recent months. Authorities have also recently released graphic footage of recent attacks as part of an English-language CCTV special.

Read more by and about Ilham Tohti, via CDT.