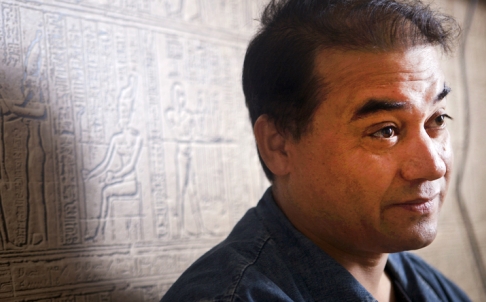 In March, PEN American Center announced it would confer the 2014 PEN/Barbara Goldsmith Freedom to Write Award on Uyghur writer Ilham Tohti, who was detained in January 2014 and has since been charged with separatism. In an editorial condemning the award, the official Global Times equates Ilham Tohti’s work with recent violent acts, including the car crash near Tiananmen Square and the knife attack in the Kunming train station:

Obviously, the West is trying to pressure the Chinese government once again and offer spiritual support to dissidents. Tohti is a Uyghur, and this identity made him particularly critical of the government’s policy in the northwestern Xinjiang Uyghur Autonomous Region which has experienced a series of violent clashes in recent years.

The trend is spreading out of Xinjiang recently. Terrorists from Xinjiang are to blame for a car crash in Tiananmen last October and a mass stabbing in Kunming in March, resulting in dozens of deaths and injuries.

The Chinese government has attached the highest importance to the stability of Xinjiang. Tohti reportedly has a close relationship with the World Uyghur Congress that instigates the independence of Xinjiang. The website he established in 2006, Uyghur Online, was shut down several times during the July 5 riot in Xinjiang in 2009 because of rumormongering and clamoring for separatist sentiments.

The West’s support for dissidents like Tohti comes at a time when China is at a critical juncture in combating terrorism and boosting national unity. These people share a great number of similarities in values with Western society whose support has become their leverage in challenging Chinese authorities.[Source]

Yet in a lengthy biographical essay written in 2011 and recently translated by China Change, Ilham Tohti explains that he has purposefully limited contact with Western organizations, precisely to avoid such accusations. He also explains his work and his life experiences that compelled him to become an advocate for greater understanding between Hans and Uyghurs:

It is my belief that I will not be doing a service to my ethnic group and my country unless I remain a scholar—a ‘clean’one at that —and use my free time to help others and serve the public interest.

Precisely because of this strong belief, since July 5th, 2009 I have doggedly refused to take a single cent from foreign organizations, whether diplomatic entities or NGOs, when I encountered financial difficulties resulting from external pressure. Even during business dealings, I was unwilling to make any money through foreign connections. I could have sat at home and made money from my political and economic contacts in Central Asia, Europe, and America. If I were a Han, maybe I could have profited this way, but as someone who has been under suspicion, I have to maintain even stricter standards for myself, bearing more pressure and facing more trials than Han intellectuals could possibly imagine.

Because of the sensitive nature of ethnic issues, for a long time there has existed not only social divisions between Han and Uighur people, but also a lack of regular communication between Han and Uighur intellectuals. This division, as well as mutual suspicions, have worsened the ethnic situation. Yet, amazingly, there have been almost no public discussions about it, and the atmosphere around it is both plain strange and also terrifying. [Source]

Ilham Tohti’s daughter, Jewher Ilham, who is currently in the U.S., will testify about his case at a Congressional-Executive Commission on China hearing in Washington next week.

Read more about Ilham Tohti and about Uyghurs in China, via CDT.