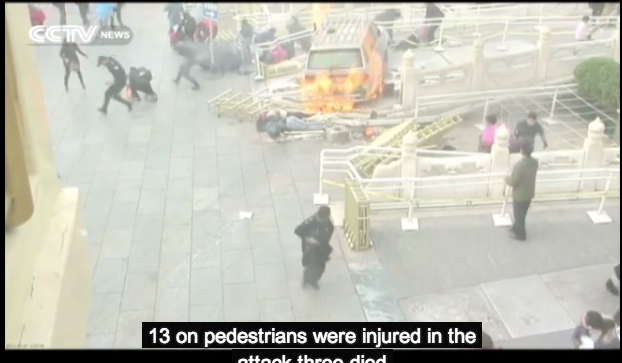 After releasing footage last week of the June 15 attack at a chess parlor in Hotan, Xinjiang, CCTV has aired a 23-minute English-language feature on China’s rising problem with “violent terrorist crimes.” The video contains graphic footage of attacks that occurred during riots in Turpan last June, the October 2013 Tiananmen jeep crash/explosion, the mass stabbings last March at Kunming railway station, and the attack on an Urumqi market last month. Relying on video footage provided by the State Council Information Office and many street-level and expert interviews, CCTV’s report ties recent attacks to the global jihad movement, credits the spread of “violent jihad” to the Internet, and also attributes attacks to and thoroughly describes the East Turkestan Islamic Movement:

Reuters reports that the State Council Information Office also provided their organization with the surveillance footage, noting that the newly released video footage signals China “step[ping] up its propaganda campaign to counter [the] upsurge in violence.”  Other news from Reuters (via the Globe and Mail) reports that Chinese authorities have confirmed an attack occurred last Friday on security officials in western Xinjiang:

Chinese authorities have confirmed an attack on security personal at a checkpoint in the restive far western region of Xinjiang, which a U.S.-backed radio service said left five dead.

The official confirmation came in an article by the local government about public study sessions against terrorism, apparently set up in response to the Friday attack, although the article provided few details.

In a Sunday report, Radio Free Asia said assailants stabbed two police officers guarding a security checkpoint in Qaraqash county and set fire to a room in which three other officers were sleeping, killing all five.

The local government article Tuesday said militia members manning a checkpoint were killed. Confirmation of such attacks can be difficult, because authorities often play down attacks targeting symbols of power. […] [Source]