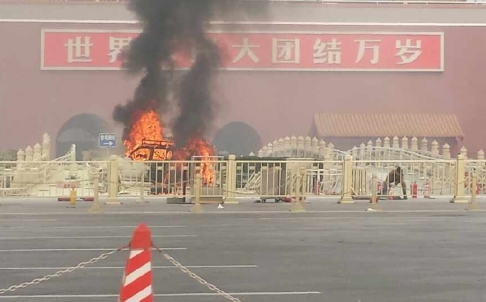 Chinese police have labeled Monday’s jeep crash and fire in Tiananmen Square a “carefully planned, organized and premeditated” terrorist attack conducted by Uyghur extremists. Five suspects beside the three who died in the incident have been detained, according to Xinhua:

Usmen Hasan, his mother, Kuwanhan Reyim, and his wife, Gulkiz Gini, drove a jeep with a Xinjiang plate to crash into a crowd of people at noon on Monday, killing two people and injuring another 40, the spokesman said.

[…] Police found gasoline, equipment full of gasoline, two knives and steel sticks as well as a flag with extremist religious content in the jeep.

Police have also found knives and at least one “jihad” flag in the temporary residence of the five detained suspects.

[…] According to the spokesman, they admitted that they knew Usmen Hasan and conspired to plan and carry out the attack. They said they had not expected that the police could capture them only about 10 hours after the incident. [Source]

At The Wall Street Journal, Charles Hutzler and Brian Spegele explained the context of the attack amid long-running clashes fueled by religious restrictions, heavy-handed security measures and economic disparities:

Authorities on Wednesday didn’t place blame on any group, but released information suggesting the attack was carried out by people from the western region of Xinjiang, which has seen protests against Chinese rule by some members of its mostly Muslim Uighur minority.

[…] Some militant Uighurs in Xinjiang, a region of oil and gas fields that abuts Central Asia, have carried out bombings, assassinations and other violent acts in Xinjiang in recent decades. Monday’s attack, if confirmed to be the work of Uighurs, would appear to be the first such attack in Beijing since Uighurs were accused of a crude bus bombing in 1997 that injured 30 people.

Persistent antigovernment violence in Xinjiang […] is posing a challenge for Beijing. Minority ethnic groups, while a tiny percentage of China’s population, are spread out over a third of the country along strategic border areas. Beijing’s strategy in recent years of pouring in investment to raise living standards and police to impose security hasn’t stopped the violence, and to some extent has antagonized local residents further. In Xinjiang, clashes appear to be on an uptick in the past two years, according to accounts from monitoring groups. [Source]

One of the suspects, they note, is from Lukqun, the site of bloody violence this summer.

Activists in exile have raised doubts about Uyghur involvement. In an interview with The Diplomat last week, which also touched on wavering American support and her own visit to Japan’s controversial Yasukuni war shrine, World Uyghur Congress president Rebiya Kadeer insisted that “there is absolutely no organized terrorist threat” in the region. Nevertheless, she warned, “if China is unwilling to change its repressive policies in East Turkestan, I am fearful that the bloody incidents that have plagued the region in recent months will continue, and even get worse.”

Following Wednesday’s announcement by Chinese police, Kadeer told Reuters that “Chinese claims simply cannot be accepted as facts without an independent and international investigation of what took place in Beijing on Monday. If the Uighurs did it, I believe they did it out of desperation because there is no channel for the Uighur people to seek redress for any kind of injustice they had suffered under Chinese rule.” In a WUC statement, she added:

“Today, I fear for the future of East Turkestan and the Uyghur people more than I ever have. […] The Chinese government will not hesitate to concoct a version of the incident in Beijing, so as to further impose repressive measures on the Uyghur people. Chinese officials commandeered the war on terror for its own cynical purposes to justify harsh measures against the Uyghurs in East Turkestan. There is no sign we will see anything different this time, even though evidence of what really happened yesterday is thin on the ground.” [Source]

A spokesperson for the organization claimed that 93 Uyghurs have already been detained without explanation since Monday. The Associated Press reported that widespread searches and questioning have left other Uyghur residents tense:

“They (police) come to search us every day. We don’t know why. Our IDs are checked every day, and we don’t know what is happening,” said Ali Rozi, 28, a Uygur trader who gathered with others at the dusty outdoor Panijayuan curio market in Beijing on Wednesday.

“We have trouble every day, but we haven’t done anything,” said Rozi, who is from Kashghar, the capital of Xinjiang province where most Uygurs live. […]

“I am also upset. They crashed a car, and we end up being harassed by police every day now, saying that we Xinjiang people are like that,” said Rozi Ura Imu, a 48-year-old trader in jade and other precious stones from the ancient Silk Road city of Kashghar. [Source]

A Global Times editorial argued that Uyghurs would have to tolerate some additional scrutiny following the attack, but urged all Chinese to “join hands in fighting against violent terrorist forces”:

Xinjiang terrorists are expanding their realm of activities but the public needs to keep cool-headed. We have to foil their attempts to create panic and sow feelings of estrangement. […]

The inland people need to step up vigilance. Meanwhile, we should know this will discomfort the Uyghurs, which needs to be offset by more hospitality and enthusiasm from us. We have to make the Uyghurs feel our sincerity.

The people in Xinjiang also need to understand the negative effects and overcome them by cooperating with their inland counterparts. Only by this, can we break down the terrorist forces and avoid enhancing estrangement in the society.

As an extensive ChinaFile feature by James Palmer explained last month, mutual suspicion between Uyghur and Han already runs deep. Information controls on information surrounding Monday’s incident have continued, as Fei Chang Dao and China Real Time report, but both note that these measures appear to be aimed in large part at keeping ethnic tensions from boiling over. As Rachel Lu wrote at Tea Leaf Nation, however, the gap between Uyghur and Han now seems more likely than ever to widen:

Qin Ailing, a Chinese reporter who has written about Xinjiang, argued that personal relationships were the only way to change the dynamic. On Oct. 30, she tweeted that Chinese should “really pay attention to the Uighur friends around you and the difficult predicaments that they’ve encountered in their lives — even those who may be preparing for ‘terrorist activities.’”

But with the latest incident, rising comity between Hans and Uighurs is unlikely. “After a terrorist attack in China’s political center, there is no way” that the government will relax its grip on the region, one Weibo user commented. Conciliation has failed, he wrote, and “keeping up the high pressure is the only way to go” — even if, he continued, a “vicious cycle” of crackdown and backlash is inevitable. [Source]