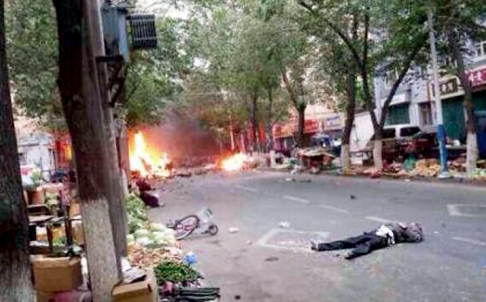 In the second violent attack in Urumqi in a month, two cars crashed into a market, one of which exploded, while assailants in the cars detonated explosives, according to reports. Xinhua reports that 31 people were killed:

Xinhua said the assailants plowed through crowds of shoppers in off-road vehicles and threw explosives out the window before crashing head-on in the early morning attack in the city of Urumqi. It said one of the vehicles then exploded and quoted an eyewitness as saying there had been up to a dozen blasts in all.

A statement from the Xinjiang regional government said the attack occurred at 7:50 a.m. and people had been killed and injured, but gave no further details.

“I heard four or five explosions. I was very scared. I saw three or four people lying on the ground,” said Fang Shaoying, the owner of a small supermarket located near the scene of the blast.

And Reuters has more on the government’s response:

State media had earlier reported that two vehicles rammed into a crowd of people at a morning market in the city of Urumqi. Explosives were hurled from the vehicles, and one of the vehicles exploded.

From earlier People’s Daily tweets, before the death toll was announced:

#Xinjiang blast: Explosion occurred at around 8am on 22nd near a park in Urumqi. Causalities unknown pic.twitter.com/uyqhaZBLcL

#Xinjiang blast: two burned cars being tolled away from the scene. Traffic nearby the scene has returned to normal pic.twitter.com/QFU6teehSo

#Xinjiang blast: Police cordoned off the scene after the explosion that has killed unknown number of people on May 22 pic.twitter.com/lZQRIAOC8C

Meanwhile on Wednesday, 39 people were sentenced in Xinjiang on terrorism charges.