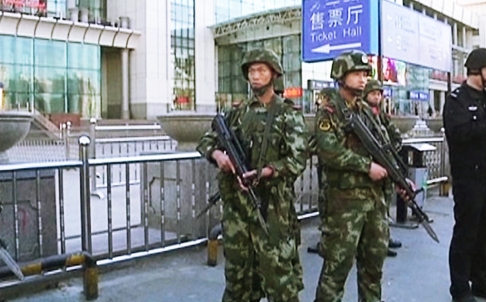 Just after 7PM on April 30, a blast shook the largest train station in Urumqi, the capital of Xinjiang, killing three and injuring another 79, after two men allegedly attacked bystanders with knives. Xinhua reports that two of the three reported dead after the explosion were the knife-wielding “religious extremists” who perpetrated the violent attack:

An investigation showed one of the two suspects was Sedirdin Sawut, a 39-year-old man from Xayar County, Aksu in southern Xinjiang.

The two have long been involved in religious extremism. At 7:10 p.m. Wednesday, they stabbed people with knives and set off explosives at the exit of Urumqi south railway station.

The two suspects were killed by the explosion. An innocent citizen also died and 79 others were injured in the attack.

China Daily has more details on the “decisive actions” ordered by Xi:

“The battle to combat violence and terrorism will not allow even a moment of slackness, and decisive actions must be taken to resolutely suppress the terrorists’ rampant momentum,” Xi said.

[…] Xi demanded profound awareness of the Xinjiang separatist forces and noted that the anti-separatism battle in Xinjiang is long-term, complicated and acute.

Also, Xi has ordered all-out efforts of local authorities to rescue and treat the injured as well as prompt investigation to solve the case and punish the criminals.

The social stability should be properly ensured, Xi said, adding that measures should be taken to safeguard the security of people of all ethnic groups and the order of their normal life and work. [Source]

The explosion came on the last day of Xi Jinping’s first presidential trip to the restive western region, on which he oscillated between advocating for ethnic inclusion in Xinjiang and a hard-line approach in an area he called the “frontline against terrorism.” While Xi’s anti-terror rhetoric has gotten even tougher since the blast, the BBC notes that state television has put focus the president’s call for ethnic solidarity:

Since the latest attack, Chinese state TV has been endlessly casting Mr Xi as a paternal leader meeting the locals during his four-day visit.

In some of the footage he is shown sporting a traditional cap worn by Uighur men.

But Beijing says the violence is being sponsored by overseas groups andthat only way to quell the unrest is through greater development and integration.

That was why Mr Xi was shown at a bilingual school stressing to Uighur children the importance of learning Mandarin, the country’s official language, as well as their native tongue.

The New York Times surveys opinions on the possible significance of the attack coinciding with Xi’s Xinjiang trip:

Pan Zhiping, a professor at Xinjiang University in Urumqi who studies unrest in the region, said in a telephone interview that the attack was meant to “challenge the Chinese government.” He said that Mr. Xi’s visit reflected the government’s two-track approach and that Mr. Xi traveled the length of the region, from small villages to cities, to encourage people to participate in China’s economic development.

[…] The attack came as a train from Chengdu, the capital of SichuanProvince, in southwest China, was arriving in the station. That train traditionally carries migrant workers belonging to China’s dominant Han majority into Xinjiang, and their presence has stoked resentment among the native Uighurs, said Nicholas Bequelin, a Hong Kong-based senior researcher for Human Rights Watch. Once a majority in the region, Uighurs, an ethnic Turkic people, now make up less than half of Xinjiang’s 22 million inhabitants after decades of Han settlement.

“If this is a political act and a deliberate Uighur attack, then it’s profoundly significant because that’s a direct challenge, and it’s also a huge loss of face for Xi Jinping,” Mr. Bequelin said in a telephone interview. “It completely defeats the purpose — he spent four days beating the drum of counterterrorism, saying the center will be tough, and using very martial, warlike language. And then in the middle of the capital, you have this bomb exploding.”

[…] Chen Jieren, a Beijing-based political analyst who tracks developments in Xinjiang, said there was no question that the blast had been meant as a message to Mr. Xi. [Source]

A report from the South China Morning Post quotes representatives of exiled Uyghur group the World Uyghur Congress, who say many Uyghurs were arrested amid tight security in the blast’s aftermath:

More than 100 Uygurs were arrested after the attack, said a Uygur separatist group based in Germany. The Post has not been able to independently verify the alleged arrests.
“The explosion in Urumqi proves that suppression is not a solution to the problem,” Dilxadi Rexiti, a spokesman for the World Uygur Congress, said in a written statement.

“The Uygurs, who are struggling between despair and survival, hope Xi Jinping would give constructive suggestions to improve the chaotic situations with his visit to East Turkestan, but this has not happened,” Rexiti said, using the name preferred by Uygur separatists for the region of Xinjiang. [Source]

As the blast scene was being cleaned up in Urumqi and Xi was urging direct action against terrorism, the U.S. State Department was submitting its annual Country Report on Terrorism to Congress. The report criticized China for “marginal” cooperation, a lack of solid evidence in incidents that Beijing labeled acts of terrorism, and opacity in the aftermath of violence:

China’s cooperation with the United States on counterterrorism issues remained marginal, with little reciprocity in information exchanges. China expanded cooperation with countries in the region, however, and conducted joint counterterrorism training exercises with Belarus, India, Indonesia, Kazakhstan, Kyrgyzstan, and Russia. China’s domestic counterterrorism efforts were primarily focused on the East Turkestan Islamic Movement (ETIM), which China alleges maintains a presence in the Xinjiang Uighur Autonomous Region (XUAR) of northwest China. China has criticized the U.S. response to acts China characterizes as terrorism, alleging that U.S. expressions of concern over the treatment of China’s ethnic minorities and deficiencies in rule of law represent a “double standard” on terrorism. China frequently refers to Uighur activists abroad – including those in the United States – as complicit in supporting “terrorist” activity, but it has not provided credible evidence to support those claims.

“China falls victim of terrorism, and always firmly opposes terrorism in any form and terrorist acts conducted or backed by any person under any name,” said Qin.

China always fights against terrorism in accordance with law while paying attention to eliminating both the symptoms and root causes of terrorism, he said, adding that China is opposed to linking terrorism to specific ethnic groups or religions. [Source]

After the explosion yesterday, China’s censors demanded that only official wire copy be used in covering the incident. Many related terms became forbidden on Internet search engines, and early news reports and pictures were deleted from Weibo.