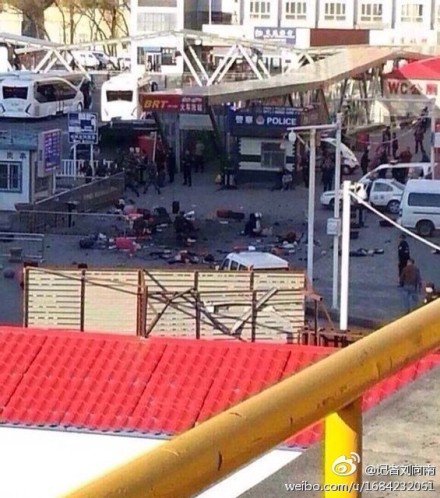 On the tail end of Xi Jinping’s first presidential trip to Xinjiang, on which he spoke so strongly about the threat of terrorism that the Wall Street Journal chose to compare his playbook to that of ex-U.S. president George W. Bush, there was a deadly explosion at the largest railway station in Xinjiang’s capital city of Urumqi. From Xinhua:

A blast occurred at a railway station in Urumqi, capital of northwest China’s Xinjiang Uygur Autonomous Region on Wednesday evening.

The explosion happened around 7 p.m. at the exit of the Urumqi south railway station. The blast was centered around some luggage left on the ground between the station exit and a public bus stop, witnesses told Xinhua.

The blast was powerful. A man at a nearby hotel said he thought it was an earthquake.

Police have cordoned off all entrances to the station square of the station and armed police have been deployed. As of 8:30 p.m, the square was still closed. Train services have been suspended. The number of casualties remains unclear. […] [Source]

The South China Morning Post initially reported that about 50 had been injured, but more recent reports from Chinese state media say 3 died in the event and 79 more were injured. Reuters reports what little is currently known from the scene of the explosion:

Pictures on China’s Twitter-like Weibo service, which Reuters could not independently verify, showed blood on suitcases and debris on the ground in front of the station.

Another picture showed what appeared to be a small blast area near a police post, though it was unclear if there were any casualties in the photograph.

Many of posts carrying these pictures were quickly removed by censors, as often happens in stability-obsessed China.

Xinhua said the blast was centered around luggage left on the ground between an exit and a bus stop. The station re-opened at 9 p.m, some two hours after the blast, under a heavy police presence, it added.

It was not clear if President Xi was still in Xinjiang at the time of the blast at the end of his four-day visit to the region in which he stressed ethnic unity and tough policing. [Source]

At least one photo of the blast’s aftermath remained on Weibo at the time of this posting, and a few are circulating Twitter: More than 100 people have died in incidents of violence in Xinjiang over the past year. Deep-seated tension between China’s majority Han and minority Uyghur populations rose sharply after a brutal knife attack at the Kunming railway station, blamed by state media on “Xinjiang separatist forces,”  left 29 dead in March.

Three people confirmed dead and 79 others injured in terrorist attack at a railway station in Urumqi, Xinjiang

According to AP, CCTV reported that knife-wielding attackers were present at the train station, and the state broadcaster labeled the event a “terrorist act.”