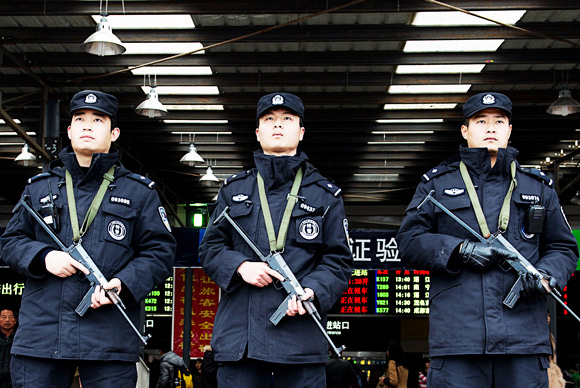 Amid frequent protests by self-immolation and episodes of violence in China’s far west, scholars have been discussing the causes of tension in ethnically and religiously distinct regions of China. In Xinjiang Uyghur Autonomous Region, hostility between local Uyghurs and the ever-increasing population of implanted Han families has been mounting in recent years, and violence has become more common. Small Uyghur-Han skirmishes have occurred outside of the far-western autonomous region, but a premeditated jeep crash last year in Tiananmen Square sparked a debate that Xinjiang terrorists may be responsible for inciting violence elsewhere in China. After a crew of eight assailants (all now dead or in police custody) attacked the Kunming railway station last weekend, China’s state media described the incident as a “terrorist attack” conducted by “Xinjiang separatist forces.”  A New Yorker blogpost from Evan Osnos looks at how the recent incident in Kunming will likely widen “China’s ethnic divide”:

[…] In China today, the ties between ethnic groups are rooted not in Communism but, for lack of a better word, in “G.D.P.-ism”—faith in economic growth and the push for prosperity. But that is a fragile bargain. Militant Uighurs are motivated largely by resentment of their relationship to Han Chinese. Xinjiang’s Uighur population has dropped from ninety-five per cent, in the early twentieth century, to forty per cent, in 2008, thanks to an explicit migration policy intended to bind the country more tightly. On the ground, the development policy has created vast new infrastructure and economic activity, but, crucially, it has also accentuated the socioeconomic gaps between Hans and Uighurs. In Xinjiang today, Hans hold more than thirty five per cent of the region’s the high-income jobs, while Uighurs hold thirteen per cent. The ratio is widening by the year, fuelled by, and creating, even more resentment and suspicion. The events of 3/1 will make that worse. [Source]

Following the attack, the New York Times reports heightened tensions on the streets of Kunming:

Even with the objects of his ire in earshot, the landlord barely lowered his voice to describe his Uighur neighbors, who also happened to be his tenants.

“During the day they look like human beings, but at night they are thieves and thugs,” he said as a group of elderly women in traditional head scarves drank tea in the courtyard of his building. “Even the police are afraid of them. We all hate them, but there’s nothing to be done about it.”

[…D]ecades of Communist Party propaganda have failed to soothe the distrust and suspicion that color the attitudes of many Han, whose interactions with Uighurs are often limited to fleeting exchanges on the streets of Chinese cities, where Uighurs can be found selling nut-and-fig cakes or grilling lamb kebabs. “Growing up, we all heard that they carry knives and make money as pickpockets,” said Lu Xing, 33, the owner of a clothing store here. “We find them a bit frightening.”

[…]Ali Daoti, 29, a Uighur who cooks at a small restaurant in the neighborhood, said he was appalled by the killings but was also worried about a potential backlash. Mr. Daoti, whose wife is Han, said that he had always felt at home in the city, a melting pot of ethnic minorities from Yunnan Province, but that the mood had changed. “Now when I go out onto the street,” he said, “people look at me with hatred in their eyes.” […] [Source]

A report from Reuters also notes intensified distrust of the city’s Uyghur population:

“I alone have already been checked three times. The police point their guns at us. We don’t know what really happened,” Uighur restaurant worker Aniwar Wuppur told Reuters.

Residents of Kunming’s Dashuyin district, where many Uighurs live, said police came through the neighborhood hours after the attack, rounding up dozens of people for questioning.

Several Uighur men said they had been interrogated for hours but not harmed.

One family from Xinjiang, grilling skewers of mutton over charcoal at a streetside stall, said police had stormed into their home pointing guns. [Source]

As reported by the foreign press above, ethnic tension in Kunming’s Uyghur district seems to have intensified following the 3/1 attack. An article from Xinhua, however, paints a different picture:

“We are not like them,” said Abliz, a 62-year-old Uygur who has run a store with his son and daughter-in-law for 11 years.

He was referring to the terrorists from Xinjiang who, black-clad and wielding long knives, killed 29 civilians and injured 143 at Kunming railway station Saturday night.

“Everyone in the neighborhood knows it’s safe to buy food here. They know we are honest, law-abiding people — they have eyes and brains,” he said in Mandarin Chinese with a strong Uygur accent.

[…] A young Uygur man who was making buns outside a fast food restaurant refused to say a word and turned around to escape the lens of a Hong Kong reporter.

“I talk to you because we are all Chinese,” Abliz told Xinhua. “I don’t talk to foreigners.”

“We don’t speak their language and don’t want them to misinterpret us,” explained his son, Abliz Lahim. [Source]

The Global Times warns that while “the eastward expansion of Xinjiang terrorism is accelerating,” the public shouldn’t see violent extremists as representative of all Uyghurs:

If the Tiananmen car crash incident that happened in October 2013 marked the first sign that terrorism was starting to trickle into China’s central and eastern areas, this massacre can clarify that the eastward expansion of Xinjiang terrorism is accelerating.

As of now, Xinjiang is still the area which is most afflicted by terrorism in China, but the frequency and expansion of attacks has demonstrated that terrorism is no longer a casual problem but a regular issue in Xinjiang. It also signals and sets alarm for the rest of China, especially large cities, that terrorism has already crept in. This new tendency pushes China’s anti-terrorism efforts into a much more severe and demanding situation.

[…] Xinjiang is not dealing with this issue alone any more. Chinese citizens, no matter where they live and who they are, need to build the awareness that terrorism is not far away from anyone.

[…] The public must realize that a handful of extremists are far from qualified to represent tens of millions of local residents in Xinjiang. It is not only an irrational and biased mindset to put the blame on the entire Uyghur community or the Muslim world, but the idea will also abet and aid those separatists and terrorists who are desperate to take advantage of ethnic and religious conflicts.

These separatists and terrorists hope to act as spokespeople for the Uyghur people or for Islam. This is the last direction that public opinion should take. [Source]

For more commentary on the recent knife attack and the greater debate about ethnic and religious repression in China, see Wang Lixiong’s reflections on the Kunming incident as informed by his observations in Xinjiang (translated by China Change), a Facebook post by Kaiser Kuo warning against viewing Xinjiang radicalization in isolation of its global context, or The Guardian’s Isabel Hilton warning that the Chinese government is all too eager to tie Xinjiang violence into the global jihad movement.

For more background on the political, ethnic, and religious tensions that characterize Uyghur-Han relations, see a report from the Sydney Morning Herald written prior to the Kunming attack, or a view from the historical context of Chinese empire-building by Bloomberg’s Dexter Roberts.