Are Ethnic Tensions on the Rise in China? 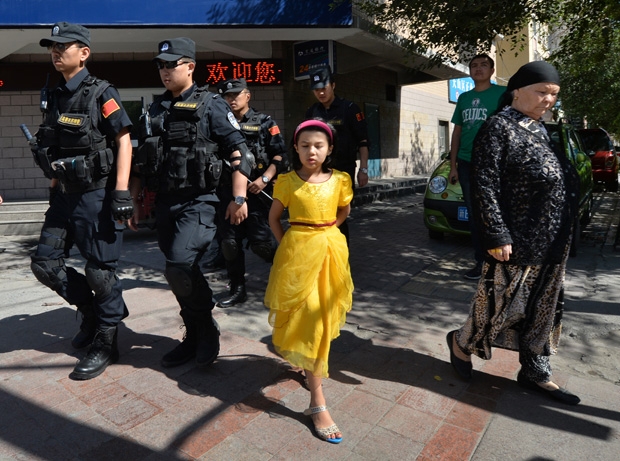 China’s two-pronged approach to pacifiying the regions has also been on display this week with the announcements of a $10 billion boost to government spending in Xinjiang and harsh punishments for relatives of self-immolators in one Sichuan county. In the ChinaFile conversation, Nicholas Bequelin argues that these current policies are fundamentally misguided. While most of the discussion has focused on Xinjiang and Tibet, James A. Millward suggests that the Han, in fact, are China’s most unruly minzu. Part of this, he writes, is because they are allowed to be; and by denying Uyghurs and Tibetans the same license, the authorities only ensure that the pressure continues to build.

[…] There is now a well-recognized script for episodes of Han political protest: First, cause a “mass incident” to bring local grievances to the attention of the Party center in Beijing. As long as protestors stick to local issues and do not attempt to build solidarity among similarly aggrieved workers, farmers, pensioners or pollution-victims nationwide, often they can get away with surprisingly little or even no sanction whatsoever. Meanwhile, if the incident gains sufficient attention, the central Party rides in to prosecute miscreant businessmen and cashier corrupt officials. The underlying systemic problems remain unaddressed, but local tension is relieved somewhat and the Party looks good. By now, this escape valve is the de facto way of dealing with corruption, land-grabs, pension-theft, pollution and the like in the absence of a free press, free courts or other democratic checks on officials and the rich elites with whom they collude.

But we use different terminology and lenses for incidents involving Tibetans and Uyghurs than for incidents involving Han Chinese alone. In the official narrative of the PRC—and, generally, in the language used by foreign observers as well— Uyghur and Tibetan political incidents are considered almost by definition to be ethno-nationalist, “splitist,” or “separatist,” if not “terrorist.” This divergent understanding means that Uyghurs and Tibetans cannot use the script, cannot access the now common escape valve when subjected to local injustices. […] [Source]

[…] Today, most Chinese believe current ethnic policies have failed. While some call for a federalist solution or more genuine forms of regional autonomy, many more agree with Professor Ma Rong of Peking University that the current approach places too much emphasis on ethnic/minzu differences (unnecessarily politicizing them) and not enough on a shared Chinese national identity. Recently, one of China’s leading and most influential policy advisers, Hu Angang, declared that “the foundation of the China dream (zhong guo meng/中国梦) is the integration of the Chinese nation’s guozu (国族), an old term first employed by Liang Qichao and Sun Yat-sen which literally means “state-lineage/race,” the sort of state-orchestrated “melting pot” that many believe requires the “mixing of bloodlines” (xie yuen ronghe / 血缘融合) through increased inter-ethnic marriage and physical contact.

Yet, any forced or rapid increase in inter-ethnic contact will only exasperate ethnic tensions and violence, in the short term at least. It’s worth considering for a moment, whether any radical cure to China’s “diseased ethnic policies” might actually end up further harming or even killing the “ethnic patients”? The admittedly provocative suggestion by Professor Barry Sautman, that China’s ethnic policies are actually more effective than those of both India and America, merits serious consideration. China has its fair share of ethnic problems, but are they any more serious than those confronted by other multiethnic societies across the globe? [Source]