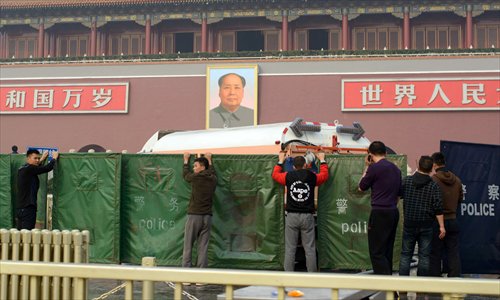 China has greeted an Islamist group’s description of last month’s Tiananmen attack as “a jihadi operation” as vindication of its own characterization of it as a terrorist incident. From Michael Martina at Reuters:

Foreign Ministry spokesman Qin Gang said ETIM and the organization that released the speech are the same group, which had revealed its true terror intent.

“This lays bare the terrorist essence of this organization and it also allows those people who recently suspected the nature of the incident to clearly see the truth,” Qin told a regular press briefing.

[…] Qin said there could be no “double standards in fighting terrorism”.

“We hope relevant countries from here on can increase counter-terrorism coordination and cooperation to jointly safeguard world and regional peace and stability,” he said. [Source]

The emergence of the Turkestan Islamic Party’s message follows heated discussion over use of the term “terrorism,” and whether the roots of the attack lay in international incitement or local grievances at Chinese policies. Foreign Ministry spokesman Hong Lei said last month that the latter suggestion “slandered China’s ethnic and religious policy,” and constituted “connivance with terrorists.” In a CNN.com op-ed, Sean R. Roberts asked “whether Monday’s alleged attack was a well-prepared terrorist act or a hastily assembled cry of desperation from a people on the extreme margins of the Chinese state’s monstrous development machine”; Global Times retorted that it was “vile” to air such questions, and urged CNN to “have some self respect.” An online poll on the op-ed by Hong Kong-based Phoenix TV drew over a quarter of a million responses, 97% of which were negative. (3% were “not sure”; there were no positive options.)

There was also debate among Western observers:

@niubi should everyone endorse the govt account without any facts being presented or independently confirmed? reminds me of "cults" ca 1999

At The Diplomat, Alessandro Rippa urged scholars and journalists to “begin by calling the attack what it really was: an act of terrorism.”

The TIP statement has done little to settle the question. From Jonathan Kaiman at The Guardian:

Nicholas Bequelin, a senior researcher at Human Rights Watch in Hong Kong, said that ETIM has reformed as the TIP in recent years; in 2012, its leader was killed by a CIA drone strike in Pakistan. The US department of state labelled ETIM a terrorist organisation in 2002, he said, and the Chinese government continues to use the appellation to lend international credibility to its anti-terrorism programme.

The TIP has claimed responsibility for bus bombings in the Chinese cities Kunming and Shanghai, and threatened attacks on the 2008 Olympics in Beijing. “The problem is that their credibility is dodgy at best,” Bequelin said in an interview earlier this month.

“It’s not clear whether they are a real outfit that is actively planning things, or just a bunch of people who are sort of agitating.” [Source]

Am no terrorism expert, but if Turkestan Islamic Party claims of TAM attack, shouldn’t they provide some evidence? And why a month after?

I haven't see anything in Turkestan Islamic Party videos in relation to "attacks" that couldn't have been lifted from the web. #Xinjiang

Groups like TIP are “so shadowy and nebulous that almost anyone could step in and say they were this group and get support from some crazy organization,” said Dru Gladney, a Xinjiang expert and professor at Pomona College in Claremont, California.

[…] Allegations of organized armed groups conducting “terrorist attacks” offer “a convenient narrative,” said Gladney. “It serves a lot of people’s purposes,” he added. “Many people claim it provides a pretext for China’s repression of Uyghurs.”

[…] “Nobody denies there’s violence,” said Gladney. But incidents like the Tiananmen crash, which Chinese state media reported was an orchestrated attack by a Uyghur man, were what Gladney believes were isolated, “idiosyncratic” incidents. [Source]

Much of the skepticism is fed by China’s overly broad use of the terrorist label in the past to divert blame from its own policies and onto overseas groups. In 2005, Human Rights Watch reported “no sign of any attempt by the Chinese authorities to distinguish between peaceful political activists, peaceful separatists, and those advocating or using violence.” China, it said, claimed “that all Uighur opposition to Chinese domination, including non-violent resistance, is connected to international radical-Islamic terrorism.” The organization also highlighted evidence that even non-political violent crimes may have been labeled in the same way.

Official accounts of violence in Xinjiang and its causes have often been disputed. Authorities reported, for example, that a bloody clash which left 21 dead near Kashgar in April was inspired by overseas terrorist videos. But one Xinjiang activist claimed at the time that the incident was actually triggered by the shooting of a Uyghur youth during an illegal house search by officials. The AFP’s Carol Huang reported on Sunday that, according to local residents, “the ‘real reason’ was that an official tried to force a woman to remove her veil and ‘people got upset’.” Huang described the ongoing anti-veil campaign, named “Project Beauty”:

“We need to hold onto our traditions and they should understand that,” said a 25-year-old woman who has been registered twice.

Offenders were made to watch a film about the joys of exposing their faces, she added, speaking behind a white crocheted covering.

“The movie doesn’t change a lot of people’s minds,” she said, like others declining to be named.

[…] The Xinjiang Daily, run by the ruling Communist Party, warned of the potential dangers of Islamic dress in a July opinion piece.

“Some people with ulterior motives are distorting religious teachings” and “inciting young people to do jihad”, it said, adding that black robes induced depression and scared babies. [Source]

Restrictions on religious clothing also go hand in hand with a new requirement that college students be “politically qualified” in order to graduate, according to Zhang Zhilong at Global Times:

The principals and the Party secretaries in local universities agreed that the education system is one of the main battlefields against separatism, so being politically qualified is the prime request.

University students should safeguard ethnic unity and oppose separatism and that is the most important task of Xinjiang universities, said Li Zhongyao, Party secretary of Xinjiang University.

The remarks were made at a recent meeting to promote the mass line campaign among local university principals and Party secretaries.

Willi Barati, president of Xinjiang Normal University in Urumqi, said that if students are found to be wearing religious clothing should be dealt with in a timely manner, according to the report. [Source]

Such religious and cultural restrictions combine with heavy-handed security and economic disparities to sharpen already tense relations between Han and Uyghur, with sometimes violent results.

Nevertheless, the University of Michigan’s Philip Potter wrote at Sinosphere last month, ties between Uyghur extremists and terrorists abroad are not purely the stuff of Chinese propaganda:

[…] The grievances are certainly homegrown, but one of the key points I demonstrate in the article is that the Uighur situation is increasingly on the radar of the broader international jihadist community. The result is that some key voices in that community have started to call for attacks against China. Probably more importantly, Uighur militants have played an increasingly important role in organizations operating in Pakistan and Afghanistan, so the opportunity for links is certainly there.

That said, at this time these are potential threats that we need to keep an eye on rather than active alliances. These concerns need to be balanced against the Chinese government’s incentives to link attacks to foreign forces in order to shift international perceptions away from the sense that they are cracking down on separatists to the idea that force is justified as part of a global war on terrorism. [Source]

See also Shannon Tiezzi’s account at The Diplomat of the growth of China’s international counterterrorism activities, “with the help of two unlikely allies: Pakistan and the U.S.”