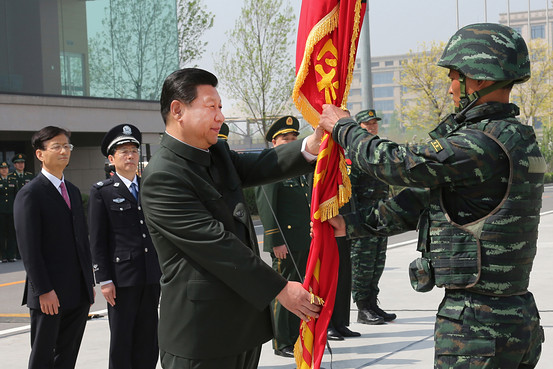 Early this year and following several incidents of violence involving Uyghurs—the predominately Muslim ethnic minority native to the restive Xinjiang region—Xi Jinping announced that Beijing would shift the primary focus of its Xinjiang policy from economic development to social stability. Two months later, 29 were killed in a knife attack at the Kunming railway station. The tragedy, blamed by state media on “Xinjiang separatist forces,” seriously heightened long-strained tensions between China’s majority Han and minority Uyghur ethnicities. This week, Xi Jinping was in Xinjiang for the first time as China’s president, and the New York Times reports a duality in his demeanor that directly mirrors Beijing’s policy:

Two sides of China’s policy in Xinjiang — and two sides of China’s president, Xi Jinping — have been on display during Mr. Xi’s visit to the tense western region, where he enthusiastically endorsed policies to integrate the Uighur ethnic minority while warning that his government would be unforgiving toward separatist violence.

[…] Photographs and television footage showed Mr. Xi as an amiable figure, chatting with Uighurs and officials around a table sporting baked flatbread and local snacks. They showed him smiling with a group of Uighur schoolchildren. They showed him wearing the distinctive, four-cornered “doppa” cap worn by many Uighur men. Yet they also showed Mr. Xi inspecting security troops in protective helmets and vests, and examining spears, clubs and other weapons.

[…] International human rights groups and advocates of Uighur self-determination argue that the Chinese government’s economic and social policies in Xinjiang have exacerbated tensions. They say that Uighurs feel increasingly insecure and dispossessed in Xinjiang, where they account for a little under half of the 22 million residents.

But during his visit, Mr. Xi indicated that he saw greater integration of Uighurs as a solution to discontent, not as its cause. The Chinese government sees the growing ethnic violence in Xinjiang as emanating from fanaticism sponsored from abroad, not from its own policy failures. Mr. Xi visited a bilingual school, where Uighur children were being taught in Mandarin as well as their own language. [Source]

Party-owned People’s Daily has been tweeting photos from Xi’s travels in Xinjiang that show both sides of China’s Xinjiang policy—the integrative:

Xi’s trip comes ahead of a June work conference that will see the drafting of Xinjiang policy. The South China Morning Post relays the anti-terrorism agenda Xi brought with him to Xinjiang:

Xi Jinping has made his first presidential visit to what he called the “front line against terrorism” in the restive region of Xinjiang.

[…] “You must have the most effective means to deal with violent terrorists,” Xi was quoted by Xinhua as saying. “The more you sweat in training, the less you bleed in wartime.”

Cracking down on terrorism has been top of the agenda for Xi’s administration and is among the priorities of the Communist Party’s newly created National Security Commission.

[…] Over the past two months, Xi has publicly discussed the battle against terrorism 15 times.

Two days before Xi toured Kashgar, he vowed in a Politburo meeting to “resolutely crack down on terrorism and separatism with high intensity to safeguard national security”. [Source]

The Wall Street Journal’s coverage of Xi’s trip and his anti-terrorism posture in the preceding weeks compares the Chinese president to an ex-U.S. president so associated with fighting terrorism:

Xi Jinping is taking a page out of George W. Bush’s playbook.

China’s president has signaled aggressively in recent weeks that a central element of his leadership will be fighting those the government views as terrorists.

The government must “make terrorists like rats scurrying across a street, with everybody shouting “beat them!” the official Xinhua news agency quoted Mr. Xi as saying ahead of a recent trip to the at-times turbulent city of Kashgar.

[…] The Chinese government says growing violence in the region stems from separatists who want to divide Xinjiang from the rest of China and religious extremists, including those with ties to overseas terror groups. But Uighurs in Xinjiang and overseas activists groups say the issue is more complicated and stems partly from what many view as economic discrimination against ethnic Uighurs. [Source]

Also see recent CDT coverage of a new financial reward system for those in Xinjiang who report religious and “separatist” activities.