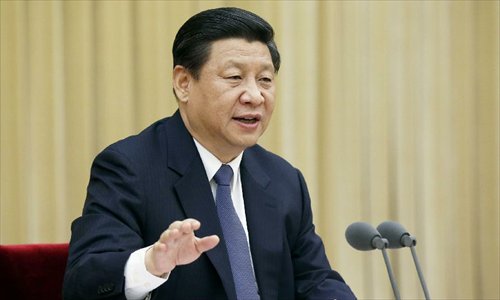 As unrest grows in the Xinjiang Uyghur Autonomous Region, Xi Jinping will be reorienting the region’s policy from one focused primarily on economic development to one that also emphasizes social stability. The SUV crash in Tiananmen Square and the attack on a Xinjiang police station are among several violent incidents in the past year that point to mounting turbulence in the region. Global Times reports:

The Xinjiang Daily quoted Zhang as saying that the focus of work should be maintaining social stability and an enduring peace, which is the “prime task” in the region. An editorial of the paper also said the central authority has clarified that development should be promoted surrounding the task of sustaining an enduring peace in Xinjiang.

The tone is different from that set at the central government’s Xinjiang work conference in May 2010. Subsequently, the region had held onto the notion that “development is the key to all the problems in Xinjiang.”

[…] In 2013, there were at least seven terrorist attacks and two riots in Xinjiang, leading to dozens of deaths. After the violence reached a peak in the countdown to the fourth anniversary of deadly riots on July 5, the regional government staged mass rallies of armed police across the region to deter terrorists. China’s top security official Meng Jianzhu attended the rally in Xinjiang capital Urumqi on June 29, 2013.

[…] “The shift in strategy was a wise move by the central authority, who clearly knows the complex situation in Xinjiang,” the Kashi official said. “While other regions can concentrate on economic growth, development would be just empty talk in Xinjiang if the security problems remain unsolved.” [Source]

Read more on Xinjiang and on violence in the region, via CDT.