39 Sentenced on Terrorism Charges in Xinjiang 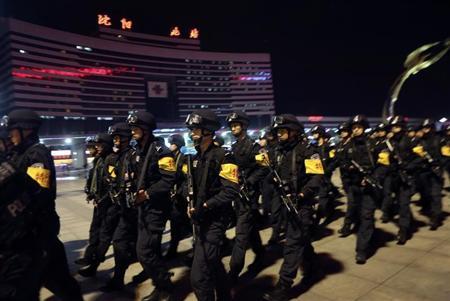 39 people in Xinjiang were sentenced to up to 15 years in prison on terrorism charges on Wednesday. The public procedure is the latest high-visibility move in China’s fight back against a series of attacks, and follows the introduction of armed patrols in major cities and another sentencing in Kashgar this month at which 300 cadres and students cheered the announcement of heavy punishments. From Reuters’ Megha Rajagopalan:

They were accused of crimes ranging from inciting violence and distributing recordings with extremist content to illegally making firearms and promoting ethnic hatred, the Legal Daily newspaper, run by the ruling Chinese Communist Party, said.

“All those who dare to challenge the power of the state or the lives of the people, will be severely punished in accordance with the law without lenience,” the paper quoted a judge of Xinjiang’s high court criminal tribunal as saying.

[…] Courts and public security bodies in Xinjiang, among other government agencies, have vowed to crack down on video and audio recordings they see as spreading extremist religious ideology or inciting violence. [Source]