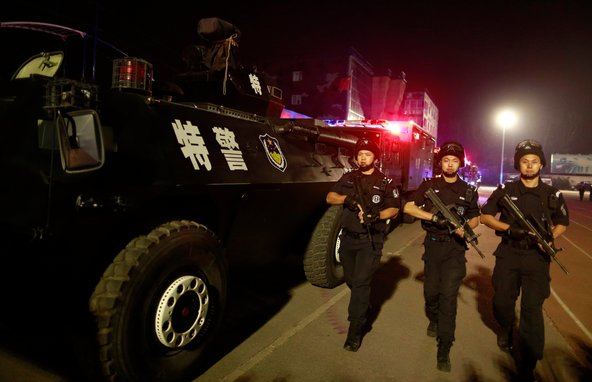 A wave of increased security measures continued this week with the introduction of armed rapid-response teams at key points around Beijing. The move follows a series of attacks around China, most seriously a mass stabbing in Kunming in March in which 29 civilians died. From Didi Kirsten Tatlow at Sinosphere:

[…] The mission of these teams, which began their patrols at 9 a.m. Monday, is to ensure that the capital is “completely covered in space and time, direction and position” against terrorist and other violent acts, the Beijing Municipal Public Security Bureau was quoted as saying.

“Their main responsibilities will be to deter those using guns or violence or other kinds of weapons in mass incidents, violent terrorist incidents and so on,” said The Beijing News, China News Service and other news outlets. The term “mass incident” suggested that the government was concerned not just about terrorism, but also other kinds of unrest, particularly with the approach of the 25th anniversary of the crushing of the Tiananmen Square democracy movement on June 4 and following major environmental protests in south and central China.

[…] Each of the special antiterrorism units in Beijing consists, ideally, of 13 police officers, but never fewer than three, with an armored vehicle, and they are to be deployed at “major road intersections, densely packed places and important city areas,” The Beijing News said. The vehicles and their teams will be responsible for patrolling a stretch of up to three kilometers, or 1.9 miles, and are expected to reach the scene of any incident within three minutes. The patrols will “strengthen defense and watch over the streets, with highly visible armed police patrols deterring any terrorist activity,” the newspaper said. […] [Source]

Liu Siyue, an accountant in Beijing’s Chaoyang district, said he was disturbed by the increase in security forces on streets.

“More than once I have been asked for my ID card by a policeman when walking in downtown areas. I feel very uncomfortable about this,” he said.

But Li Yuanyuan, a public servant in Dongcheng district, said she felt safer with the presence of the new patrolling force.

“It is the price we pay for safety. It is unavoidable,” she said.

“A few more attacks can make us as terrified as the Americans.” [Source]

Also in Beijing, barriers along Chang’an Avenue through the heart of the city received a functional and arguably visual upgrade last week. Xinhua reports that other cities including Guiyang are also stepping up security. In Shanghai, 1000 beat police were given specially designed revolvers last month, going armed for the first time in 60 years. On Monday, the city saw its first police shooting under the new rules, not of a terrorist but of a suspected fuel thief. From James T. Areddy at China Real Time:

Policeman Wu Hui, a 29-year-old cop with seven years on the force, fired when the unidentified suspect tried to ram his car through a police roadblock and injured the knee of Mr. Wu’s partner, police said. The alleged thief, who suffered a non-fatal shot to his shoulder, was apprehended along with two other suspects.

[…] Rather than the kind of beat cop Shanghai said it will arm, police said Mr. Wu is a member of the city police department’s special weapons, or SWAT team. And instead of packing the revolver Shanghai police announced its officers were newly trained to carry, Mr. Wu fired a Chinese-made Type-64 pistol associated with clandestine military operations. […]

[…] Comments from the Shanghai policeman Mr. Wu appeared in multiple Shanghai newspapers on Monday: “When I shoot, I deliberately avoid the head, but instead target the arm and shoulders,” he said. Mr. Wu said he was grateful the suspect wasn’t badly injured, saying “it’s a life, after all.” [Source]

The Los Angeles Times’ Barbara Demick and Julie Makinen report that the rearmament of police has been on Xi Jinping’s agenda for some time:

“The Chinese police will be more like the U.S. It is a long-term trend,” said Xu , a former police officer who teaches criminology at the University of Macao.

China has some of the strictest gun control laws in the world, banning even hunting for sports in most of the country. In the 1980s, many of the police forces that still used firearms forced their police to turn them in because the weapons were so frequently misused or stolen. A separate force, known as the Peoples’ Armed Police, is deployed to suppress protests, most notably in ethnic minority areas such as Tibet and Xinjiang.

[…] “Kunming is just the trigger. Xi Jinping had wanted to do this for some time,” said Xu.

[…] “In China there are many fewer checks and balances and accountability mechanisms. … The police system itself is known for abuses, so the fact that they will be more militarized will probably bring on some more problems,’’ said Maya Wang, a Hong Kong-based researcher for Human Rights Watch. [Source]