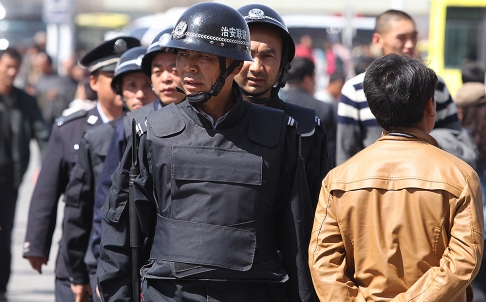 As security is tightening throughout China after recent episodes of violence in the country, many of which have been called “terrorist” attacks by the Chinese government and official media outlets, Xinhua reports a clash with police in Aksu, Xinjiang left one suspect dead on Thursday:

Police shot dead one assialant and captured another on Thursday in northwest China’s Xinjiang Uygur Autonomous Region, local authorities said in a statement.

The attack occurred at about 1:20 p.m. in the city of Aksu when police checked a suspect vehicle based on a tipoff from residents, said the statement.

During the check-up, the suspects made a surprise knife attack on police officers and hurled burning devices at police patrol cars, it said. One auxiliary police officer was seriously injured. [Source]

Xinjiang authorities recently launched a campaign to reward those who report suspicious religious or  “separatist” activity. State media has not described this most recent attack as an act of”terrorism”. Last month in Aksu, locals protested when police shot and killed a 17-year-old Uyghur student after he ran a red light.

While episodes of violence in Xinjiang have been common for decades, tensions have been rising throughout the country since last October, when authorities called a jeep crash at Tiananmen Square a “carefully planned, organized and premeditated terrorist attack.” In March, a group of eight attacked the Kunming railway station killing 29 in what state media called a “terrorist attack” by “Xinjiang separatist forces,” and the Global Times warned of the “accelerating eastward expansion of Xinjiang terrorism.” After a knife attack injured six at a major train station in Guangzhou earlier this week, state media was careful to refrain from labeling the incident an act of terrorism.

The violence in Guangzhou followed a knife-attack/bombing less than a week prior at the Urumqi train station. The Urumqi attack came as Xi Jinping was wrapping up a trip to Xinjiang, on which he spoke about the looming threat of terrorism and stressed ethnic cohesion in the restive area. Since returning to Beijing, Xi has ordered “decisive actions […] to resolutely suppress the terrorists’ rampant momentum.”  Commentary from Russell Leigh Moses notes the “direct political challenges” that may come to Xi for personalizing a focus on Xinjiang that goes beyond encouraging economic development—a strategy that Beijing is still putting much weight on:

First, the fact that Party media has emphasized  Xi’s connection to Xinjiang means that events there are now directly tied to his ability to manage them.  Wherein before Xi could justifiably claim that terrorism in Xinjiang was a problem he inherited from his predecessors, his decision to spend so much time there recently runs the risk of making the region an early showpiece of his tenure as China’s paramount politician.

Further terrorist attacks — such as the one on a police station in the city of Aksu on Thursday night — will be seen by Xi’s allies as an assault on his reputation, and viewed by his political opponents as an opportunity to question his skills as a reformer who can address China’s shortcomings.

Moreover, this rise in violence comes at a time when the Chinese government already faces a litany of oncoming challenges — increasing regional tensions, the 25th anniversary of the crackdown in Tiananmen Square and an increasingly erratic economy. [Source]

The Guardian briefly explains the history of Xinjiang violence, and weighs Chinese government arguments against claims that Beijing’s repressive policies are inspiring more attacks throughout China:

The attacks began decades ago. The assailants used knives, guns, even grenades. They ambushed police officers and officials in places few had heard of: Akto, Kuqa, Xinhe and other dusty counties in Xinjiang, a sprawling region in China‘s north-west. State media would issue a pithy statement about the violence, and the rest of the country would shrug its shoulders and march on.

But in recent months the spasms of public violence have spread beyond Xinjiang’s borders, raising concerns nationwide about the government’s ability to keep its citizens safe. […]

[…] Experts say that without resolving Xinjiang’s underlying problems, the shows of force may be only a patch. Uighur groups abroad call the attacks a cry of despair caused by religious repression and economic marginalisation. The government defends its regional policies as open and tolerant, blaming the attacks on “separatists” and “hostile forces” from abroad.

[…] Some experts say that an ongoing security crackdown in Xinjiang often takes the form of increased repression, which in turn fuels more social unrest. “There’s a rage against the state, which is sometimes expressed in religious terms,” said Raffaello Pantucci, a senior research fellow at the Royal United Services Institute. “Mosques are being damaged, women being told to take off their veils, people being told to report other people with long beards – clearly the religious element is causing friction.” [Source]

A white paper recently released by a national security think tank warned of serious limits to China’s anti-terrorism capabilities. In a recent report, the Global Times notes that as calls to reform to China’s anti-terrorism legislation are growing louder, they are being stymied by bureaucratic congestion, a cloudy definition of terrorism, and the need to appropriately address the “complex issue of human rights”:

[…] In the Chinese mainland, there is already some counter-terrorism legislation based on constitutional law, criminal law and extradition law, but there are evident flaws and the various laws lack a cohesive framework binding them together.

Li Wei said one problem is that the definition of the crime of terrorism remains blurred.