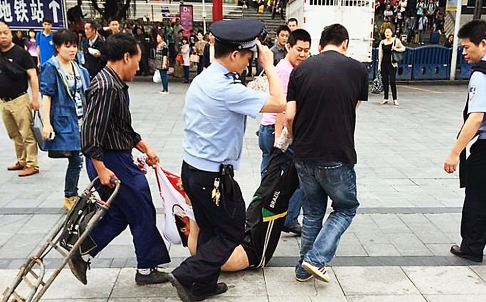 Three men wielding knives wounded six people in an attack at a train station in southern China today, the Xinhua News Agency said, the latest in a string of violent incidents at railway stations in the country this year.

The group started their assault at about 11:30 a.m. in a square outside the station in Guangzhou, Xinhua reported, citing a witness identified by the surname Chen. Police shot and captured one attacker and are hunting the others, according to the report. Four of the six wounded people didn’t sustain life-threatening injuries, Xinhua said, without giving the status of the others.

[…] Xinhua’s report on today’s incident didn’t attribute the attack to any group or give a possible motive. Guangzhou is the capital of Guangdong, which has China’s largest provincial economy. [Source]

Xinhua has since corrected initial reports claiming that multiple attackers were involved, and now attributes the assault to a single knife-wielding suspect with no explanation of the inconsistency. The most recent official report still doesn’t identify the attacker’s group or ethnic affiliations or region of origin:

Only one person was involved in a knife attack at a railway station in the southern Chinese metropolis of Guangzhou on Tuesday morning, local police said.

The male suspect carrying a long knife was shot by police and is being treated in hospital, the Guangzhou municipal public security bureau said in a statement.

The suspect was not carrying any identity card and his identity is yet to be confirmed. Six people were injured in the attack in Guangzhou railway station square at about 11:30 a.m. [Source]

The South China Morning Post notes that witnesses reported one of the injured appeared to be a middle-aged Western man, a fact that local police have denied.

This is the third violent attack at a major Chinese train station since March, and comes less than one week after  an explosion at the Urumqi, Xinjiang train station killed the two alleged perpetrators, a bystander, and left 79 injured. That attack took place as President Xi Jinping was closing his first official trip to a restive region he labeled as the “frontline against terrorism”. In early March, a knife attack at the Kunming, Yunnan railway station left 29 dead and more than 100 injured. Both the Urumqi and Kunming attacks have been labeled “terrorist attacks,” and last week Xi Jinping called for “decisive” counterterrorism action.

These recent train station attacks follow a series of other “terrorist” attacks since the October 27 Tiananmen jeep crash incident that have collectively killed nearly 50 people and injured more than 250. Recent acts of violence have stoked long-seated tensions between China’s minority ethnic Uyghur and majority Han populations.

The New York Times compares China’s official claim that attacks are organized by external organizations to the stance of World Uyghur Congress president Rebiya Kadeer, who says tensions are rooted in Beijing’s repressive policies in Xinjiang:

While the Chinese government has been suggesting the recent violence has been directed or inspired by groups outside the country, Uighur leaders, including Rebiya Kadeer, a critic of the Chinese Communist Party who lives in the Washington, D.C., lay the blame for recent attacks on what she called repressive policies by Beijing.

“To someone who knows the region from the inside and has seen the policies the Uighur people have to face, the real perpetrator would be obvious,” she said in an interview Friday with Radio Free Asia. “A researcher would put the blame squarely on the Chinese government’s policies directed at Uighurs. This is exactly why China does not allow international media to investigate the event on the ground — if only they could, the truth would be clear.” [Source]

As was the case following recent attacks in Kunming, Guilin, Changsha, and Urumqi, Chinese censors were again quick to issue media directives on the violence in Guangzhou.

Following Xi’s call to strengthen antiterrorism efforts after last week’s deadly attack in Urumqi, the Wall Street Journal quotes an expert who thinks a new antiterrorism law, long in the works, will soon be implemented:

Tougher policies are likely on the way, according to Li Wei, an antiterrorism expert with the China Institutes of Contemporary International Relations, who pointed to an antiterrorism law that has been considered since 2005 and would aim to better demarcate responsibilities among security forces.