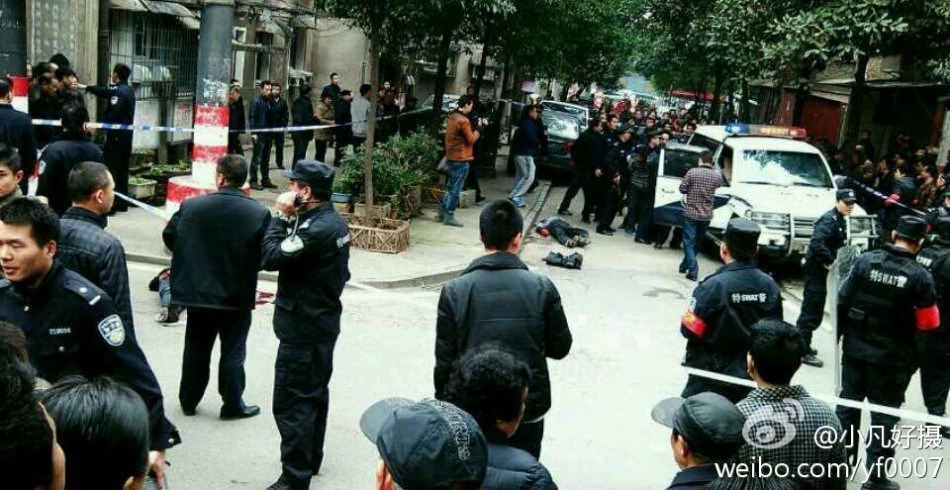 At least six have died in a stabbing rampage that started with an altercation at a grocery store in Changsha, Hunan. (小凡好摄/Weibo)

The following censorship instructions, issued to the media by government authorities, have been leaked and distributed online. The issuing government agency has been omitted to protect the source.

Urgent Notice:
(1) You may only use authoritative, standard sources when covering the knifing incident in Changsha. Do not comment or hype the story, and do not send reporters to investigate. Filter online discussion of the issue.

(2) Take care to delete the article by Zhang Lifan and Pu Zhiqiang, “On Respecting the Wishes of the Dead; Proposal to Cremate Mao Zedong’s Remains and Rebury Him.” Prevent related content from spreading online.

(3) All websites must cease republishing the following articles. Please remove them if they have already been republished: “Large-Scale Shuttering of Tencent WeChat Accounts“; “1200 Small Towns in Germany Fly ‘Free Tibet’ Flags” from the Global Times; “Foreign Minister Wang Yi Meets with Vietnamese Deputy Foreign Minister[, Thanks Vietnam for Help in Search for Malaysian Flight]” from the Ministry of Foreign Affairs; and “Why Cutting Short a Provincial Secretary’s Speech Wins Praise” from the Guizhou Daily.

(4) Websites must not hype the article “Zhou Qiang: Courts Must Dare to Persist, Take Responsibility.” Do not change the headline. Interactive sites must prohibit accusatory commentary. (March 13, 2014)

Zhou Qiang, President of the Supreme People’s Court, told a delegation in Hunan that “the courts must dare to persist and dare to take responsibility” (法院要敢于坚持敢于担当) when dealing with “sensitive” cases. Zhou brought up the example of Xia Junfeng, a street peddler who was executed last year for killing two city management officials (chengguan) in 2009, saying that “those who would not have killed Xia Junfeng are very dangerous” (不杀夏俊峰这种人就非常危险), the Jinghua Times reports [zh].