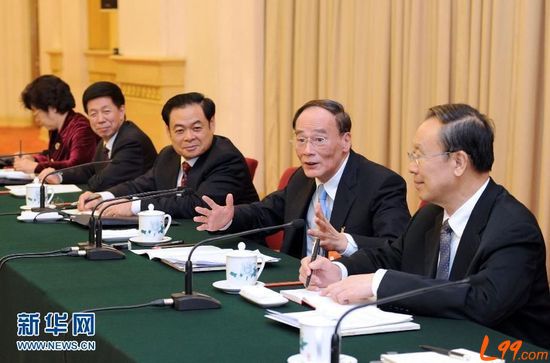 State Council Information Office: (1) All websites must delete the article “Wang Qishan Tells Secretary of Jilin to Stop: ‘Wouldn’t You Say This Is Formalism?'” (2) Remove from all website homepages the news that “three suspects in Kunming detained before violent terrorist attack; five fled to Kunming to commit crime.” Do not hype the story. (March 11, 2014)

Wang Qishan, secretary of the Central Commission for Discipline Inspection, reportedly interrupted Jilin Secretary Wang Rulin (no relation) mid-speech at the National People’s Congress yesterday, accusing Wang Rulin of “formalism.” The news briefly lit up online media in China before being deleted from most websites. From the New York Times:

“After we republished it, the impact was very big,” said the editor, who asked not to be identified to avoid repercussions. “But then, the Internet management office first came to us and demanded that we take it down, otherwise it would not be a good thing. Then the Jilin Province people came and demanded that it be deleted, because they felt it was quite humiliating.” [Source]

The state-run Global Times reports that three suspects who failed to detonate an explosive were detained in Yunnan on February 27. They are connected to the knife attack at the Kunming train station, according to an anonymous source.