Beijing on Terror Attacks: ‘You Must Not Spread the News’ 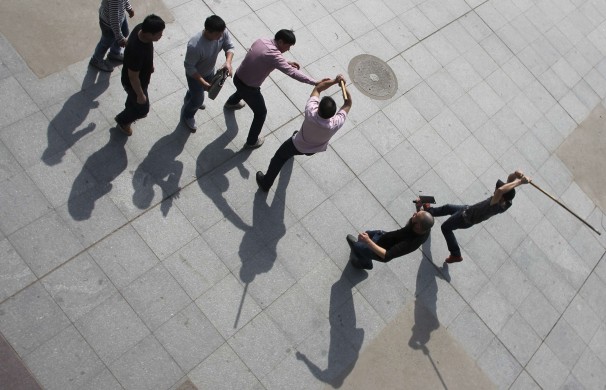 One of the latest in a series of recent violent attacks, many of which have been labeled acts of “terrorism” attributed to “Xinjiang separatists” by China’s state media, occurred in Guangzhou on Tuesday. Since the attack in Guangzhou, officially described as the work of a single unidentified attacker, state media has issued several commentaries on the need for counterterrorism development, and security has tightened in major cities throughout China. The official narrative, however, refrains from labeling the violence in Guangzhou “terrorism.” Sinosphere reports on government hesitation, and describes what typically distinguishes isolated incidents of violence from acts of “terrorism” in official reports:

The Guangzhou attack was initially described as being carried out by up to four suspects. The authorities later said that just one man, who was shot by the police and then taken into custody, was believed responsible. His identity has not yet been disclosed.

At a news conference on Tuesday, a Foreign Ministry spokeswoman, Hua Chunying, called what happened in Guangzhou a knife attack and did not label it terrorism. The state-run media have similarly been cautious. […]

The Chinese authorities have typically drawn a line between attacks committed by Uighur separatists, which are labeled as terrorism, and assaults by individuals who are members of the Han ethnic majority motivated by individual grievances. When a man in Shanxi Province was convicted last month for setting off explosive devices, killing one person, Xinhua described his act as a “bomb attack.”

The possibility that the Guangzhou attack was the work of a lone individual is unlikely to offer comfort to Chinese rail travelers. It raises the possibility of a series of copycat attacks, as when several schools were targeted in knife attacks from 2010 to 2012. [Source]

China’s ever-attentive propaganda apparatus has been managing domestic media coverage of recent violence (see the propaganda directives that followed October’s jeep crash in Tiananmen, the devastating knife attack in Kunming in March, the subsequent stabbing in Changsha, last week’s alleged suicide-bombing in Urumqi, or this week’s knife attack in Guangzhou). Exerting control over official media is an easier task than it is over the unruly realms of new media, but Beijing has long done its best, and an ongoing crackdown on social media has allowed authorities to further tighten the reins. In what may help ease future weibo cleanup efforts, from its official Weibo account the Beijing Public Security Bureau cautioned the public from spreading news if they were to be caught in an attack. The Washington post has translated the entire 10-point list from the Beijing PSB, along with an example of netizen mockery:

Also on the list was a level-headed warning against playing the hero if caught in a crisis situation:

4. Be ready to help others for a just cause but do it within your own capabilities. Many imported movies promote individual heroism, saving the world from danger [and] the warrior culture shown on Chinese TV series and movies also wins universal praise. But these plots were designed by professionals after doing research to attract audiences. In real life, our lives seem so weak in face of machinery and technology. Bravery ensuing from wisdom is always more powerful than bravery with your body. … […] [Source]

This comes after some media heralded a 49-year old man named Shan and his heroic reaction to the violence earlier this week at the Guangzhou train station. The Nanfang reports:

When calamity and chaos strike, it is the heroes that step forward and distinguish themselves by their actions. It is in the nature of a hero to act because the one defining characteristic they all share is that a hero serves.

[…] Mr Shan is a 42 year-old migrant all the way from Heilongjiang Province. After arriving in Guangzhou at 11am, he unexpectedly became caught up in the knifing incident as he was leaving the plaza.

Shan was very fortunate when the backpack he was wearing helped deflect some of the slashes made at him by the knife-wielding attacker, and as a result only suffered minor injuries.

Shan told his story to the Southern Metropolis Daily. ”I picked up a wooden rod that had been left on the ground by other passengers to confront the attacker,” he said. “More people would have been stabbed if I hadn’t done that, because the attacker stabbed everyone he met like crazy.” [Source]