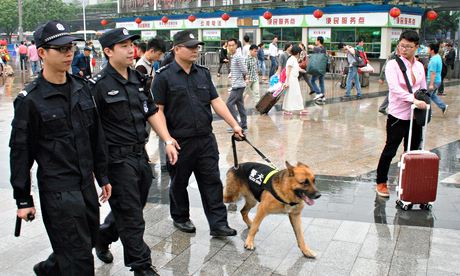 The South China Morning Post sums up a newly released China National Security Studies report (中国国家安全研究报告2014), which delivers an unfavorable assessment of China’s counterterrorism preparation in an atmosphere of increased risk. This report was released into a tense environment, after the deadly stabbing/bombing outside of an Urumqi train station last week was labeled a “terror attack“:

[…] “Terror attacks in China have become more active than in previous years in both the number and seriousness of the attacks. The anti-terrorism condition facing China is grave,” said the report released by the Centre for International Strategy and Security Studies at Beijing’s University of International Relations.

[…] The report said a suicide car attack by Uygur separatists that killed two people in Tiananmen Square in October was a sign that the “East Turkestan Islamic Movement (ETIM) is expanding its attack target from Xinjiang to other areas”.

The experience and capacity of places outside Xinjiang make it “more possible for terrorists to launch successful attacks”, Professor Wu Shaozhong, from the Chinese People’s Public Security University, wrote in the report. [Source]

Authorities called the October jeep crash at Tiananmen Square a “carefully planned, organized and premeditated terrorist attack,” sparking a debate as to the accuracy of the official “terrorism” designation. When foreign media organizations and governments failed to label the group of knife-wielding attackers who killed 29 people at the Kunming train station in March “terrorists,” official Chinese media protested.

As recent acts of violence have stoked long-seated tensions between Han and Uyghur populations, Chinese media has been careful to balance coverage of the encroaching dangers of terrorism with pleas not to view all Uyghurs as violent. Last week’s deadly attack in Urumqi occurred on the tail-end of President Xi Jinping’s tour of Xinjiang, on which he similarly balanced rhetoric calling up the need to bolster both counterterrorism and ethnic integration in the region (strangely though, a new “whistle-blower” policy offers financial rewards to those who report “separatist activity,” which can reportedly include ethnocultural indicators such as facial hair).

Most recently, another train station stabbing occurred late on Tuesday morning, this time in the southern city of Guangzhou. State media claims that a single unidentified attacker was responsible, and there has not yet been any use of the word “terrorism” in official coverage. In the time since this most recent attack, however, state media has published many Chinese– and English-language op-eds on the need to further develop counterterrorism capabilities. Xinhua stressed the importance of solidarity:

China needs an anti-terrorist campaign by the people and for the people of all ethnic groups to end terrorism and violent crimes, a renowned expert on ethnology said Wednesday.

In an interview with Xinhua, Hao Shiyuan, assistant to the president of the Chinese Academy of Social Sciences, said the country must rely on people of all ethnic backgrounds to win the war against secessionism, terrorism and against the infiltration of extremist religions.

“This is a war supported by the people and is for their own protection,” said Hao. “We need a homogeneous social atmosphere against terrorism, to root out the source of terrorism and violent crimes.” […] [Source]

China Daily likewise encouraged solidarity and the launch of a “people’s war” against terrorism, and also focused on ensuring that the entire nation is equipped to deal with an attack:

[…] The need for a nationwide antiterrorism mechanism can never be overemphasized. The central leadership has established the State Security Commission as part of its national strategy, and various eastern provinces, such as Jiangsu and Guangdong, have stepped up vigilance. Since inland provinces have realized that terrorism poses as a big threat to them as it does to Xinjiang, they have vowed to join hands with the central and other provincial governments to root out terrorism from China. […] [Source]

Fu Zhenghua, deputy minister of public security, assessed the police’s first response competence at Beijing Railway Station and South Railway station and was told it would only take one or two minutes for police to arrive at the scene in the event of emergencies.

Patrols have been stepped up across all downtown areas and squads equipped with guns, batons and patrol dogs. Another deputy minister of public security, Liu Yanping, inspected railways stations in Shanghai and Suzhou and demanded armed police remain on high alert for terror attacks while improving their anti-terror capabilities.

[…] Other major cities have also stepped up security after the recent attacks. [Source]

In recent months, China has been ramping up its security forces as Xi has been clearly signaling a commitment to anti-terrorism. After the Kunming attack, CCTV aired Xi praising a counter-terror brigade after a demonstration. At the same time, it was announced that police in several cities would be carrying firearms, a practice that Mao disallowed over 50 years ago. Just prior to his recent trip to Xinjiang, Xinhua quoted Xi saying “we should […] make terrorists as unpopular as rats crossing the street that are chased by all,” and pictures of him observing counter-terror drills were shared widely by official social media accounts. After the explosion in Urumqi, Xi called for “decisive actions” against terrorist attacks. Bloomberg reports that a top security official has now announced a “special anti-terrorism operation”:

China’s top security official said a special anti-terrorism operation will begin after a third violent attack this year at a railway station occurred in Guangzhou, near the border with Hong Kong.

China must “resolutely beat the terrorists’ arrogant brazenness,” Meng Jianzhu, head of the Commission for Political and Legal Affairs and a member of the Communist Party Politburo, said at a meeting of cadres, the official Xinhua News Agency reported yesterday. The country is on high alert after a series of violent attacks that have shaken its domestic security apparatus, with more sophisticated acts of violence blamed on ethnic Uighur separatists from restive Xinjiang province in China’s northwest. [Source]

Chinese censors have been consistent in keeping domestic media coverage of violent attacks in line with Beijing’s directives (see CDT’s leaked “Ministry of Truth” instructions that followed the Tiananmen, Kunming, Changsha, Urumqi, and Guangzhou attacks). In an op-ed for the South China Morning Post, counterterrorism researcher Zhou Zunyou argues that allowing information to flow more freely after attacks would help to ensure the public participation needed for a “people’s war”:

Chinese media have showed enormous enthusiasm for reporting terrorist incidents outside China, but have appeared uninterested in cases at home. This is a consequence of censorship; given the sensitive nature of ethnic and religious issues, Beijing prefers a low-profile strategy when dealing with terrorist incidents.

From a wider perspective, however, controlling media coverage of terrorism is detrimental to the fight against the scourge. Combating terrorism is a task for specialised security forces, but these forces alone cannot solve the problem. In this regard, the traditional Chinese strategy of a “people’s war” is of great significance.

Terrorists live among the people and terrorism occurs in front of people’s eyes. In order to combat terrorism more effectively, the government must rely on its people. If the people are ignorant of the truth, the government cannot build a strong line of defence. The fight against terrorism should be a high-profile war of the people – and that includes not only Han Chinese but also Uygur Chinese. Both ethnic groups are victims. [Source]

At The Guardian, political science professor Philip Potter argues that attacks by “Uighur militants” are becoming more sophisticated, and that it’s time for the world to start taking “Chinese terrorism seriously”:

While these incidents have set China on edge, they have received relatively little attention from the outside world. Western analysts tend to draw on the “low-tech” weaponry and comparatively low death tolls to conclude that these are minor incidents. Even specialists often miss the potential for broader international implications, seeing only an internal separatist struggle.

Both of these instincts are wrong. Attacks like those in Urumqi, Kunming and Beijing are serious, and their increasing sophistication indicates a growing threat. If they continue to escalate, there is potential for far-reaching consequences for China and the world.

Despite their reliance on relatively unsophisticated weapons, Uighur militants seem to have already mastered some of the most challenging problems that extremist organisations face. The ability to conduct complex, co-ordinated attacks like those in Urumqi and Kunming are hallmarks of organisational strength. Moreover, while it might seem counterintuitive, restraint is also a clear indicator of capability. Weak movements lash out without discipline and coordination, while strong ones wait for opportune moments and symbolically valuable targets. Last week’s attack in Urumqi certainly fits the latter description. […] [Source]