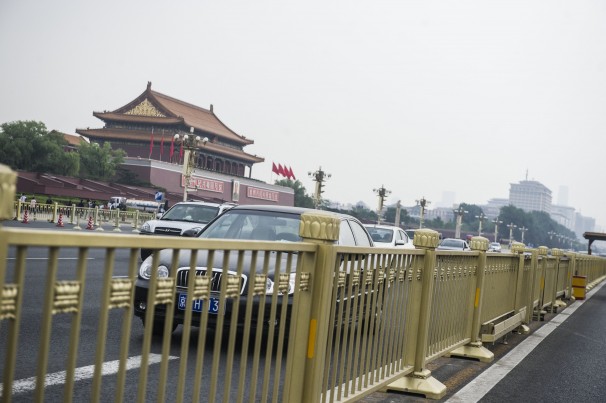 William Wan at The Washington Post reports that as the 25th anniversary of the crackdown on pro-democracy protestors in Tiananmen Square approaches, the government has “unveiled shiny, new golden railings along the square”:

Authorities say the new yellow barriers were installed to enhance car safety as well as aesthetics, but many bloggers and critics think it is more likely a reaction to an apparent protest attack last year in which three people crashed a jeep into Tiananmen Square, killing themselves and two pedestrians and injuring at least 38.

Authorities said the crash was the work of Muslim separatists from the restive province of Xinjiang.

The gold barriers are replacing older white ones that run along Chang’an Avenue, the major thoroughfare in Beijing along which the square is located. They are just one of many signs in recent weeks of how much preparation is underway — and how seriously the government is taking it — ahead of the anniversary of the Tiananmen crackdown, which occurred June 4, 1989.

[…] Many Web users on the Chinese equivalent of Twitter referred to the color of the railing as “tuhao jin,” or “new rich gold.” The word tuhao, or new rich, refers to someone who is rich but lacking in taste. (“New rich gold” is also how Chinese describe the champagne-gold-colored version of the new iPhone 5s.)

Some bloggers criticized the government for wasting money on such security projects instead of trying to combat air pollution. Other imaginative users mocked the supposed spring action of the new barriers, asking: If errant cars really do bounce off it so hard, won’t they hit others cars around it? [Source]

For 25th anniv of June 4, a new gold barrier from Fuxingmen to Jianguomen capable of repelling burning jeep attacks pic.twitter.com/8QoFxoHjRz

And there was me thinking 25 years was a silver anniversary. You can never outbling the Communist Party.