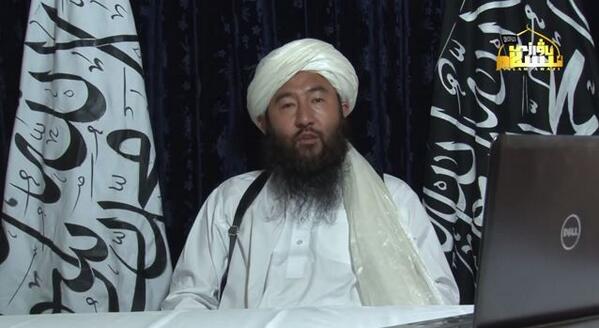 Reuters reports that the Turkestan Islamic Party (TIP), also known as the East Turkestan Islamic Movement (ETIM), has claimed responsibility for the April 30 bombing at the Urumqi railway station in a video posted to their website.

An Islamist militant group called the Turkistan Islamic Party (TIP) claimed responsibility for an attack at a train station in China’s western city of Urumqi in late April that killed one and injured 79 people, the SITE Monitoring service said.

[…] “A fighter is shown placing the explosive material and shrapnel of bolts inside a box, then inserting the detonation device in a briefcase with the explosive, and leaving the trigger exposed in an outside pocket,” SITE said of the video.

It said the video had been produced by the TIP’s Islam Awazi Media Centre and posted on its website on 11 May.

[…] China’s foreign ministry spokeswoman Hua Chunying said she had not seen the video, but believed it might further bolster China’s position on separatist groups.

“Some violent extremist terrorist groups have now emerged. They are colluding with foreign groups and are attempting violent activities in Xinjiang and other areas in China intended to destroy China’s national policy and social stability,” Hua said at a regular press briefing.

“We hope that everyone can recognise the goal of these violent groups and support the Chinese government’s will to crack down on all violent terrorist activities and preserve safety for people and society,” she said. […] [Source]

The explosion in Urumqi killed the two alleged perpetrators along with one bystander, injured 79 others, and came as Xi Jinping was wrapping up his first presidential trip to Xinjiang. Following the blast, Xi called for “decisive actions” against terrorism, and in the weeks since China has been ramping up security measures throughout the country.

The New York Times’ Andrew Jacobs tweeted that speakers of the Uyghur-language have suggested the video was not actually a claim of responsibility:

this video. Can other Uighur speakers confirm this? http://t.co/mxk5lix9ax


The North Waziristan-based Turkestan Islamic Party has taken credit for numerous attacks in China since 2008, though intelligence experts have said their claims seem exaggerated. Since October, several violent attacks in China have been labeled “terrorism” and attributed to Uyghur “extremists” or “Xinjiang separatists” by Beijing. After the October 2013 jeep crash near Tiananmen Square, Abdullah Mansour, a man claiming to be the leader of TIP, publicly called the incident a “jihadi operation.” In March, after a mass stabbing at the Kunming railway station killed 29, Abdullah Mansour said that fighting China was his group’s “Islamic duty,” and promised more attacks on China. While he expressed approval of the attacks, in neither case did the TIP leader claim his group’s explicit responsibility.

While China blames Uyghur separatists and external organizations for exacerbating long-seated ethnic tensions in China’s far western Xinjiang Uyghur Autonomous Region, some commentators and rights groups point to Beijing’s policies as the cause of unrest and increased radicalism. While in Xinjiang last month, Xi Jinping oscillated between taking a hard rhetorical line on terrorism and stressing the need for ethnic cohesion in the region. In the midst of heightened security concerns and strained ethnic relations, the Wall Street Journal notes a new campaign, harkening back half a century, which sends Xinjiang’s officials to the countryside to live beside those they govern:

Some 200,000 officials in Xinjiang, the western region of China that has seen a rising tide of unrest, will be sent to live in rural areas over the next three years, the Global Times reported this week. So far, the paper reports, more than 70,000 have already arrived.

[…] The program is aimed at winning the hearts and minds of local people, particularly Uighurs, a mainly Muslim ethnic group that has a fraught relationship with Chinese authorities. Officials have been helping villagers with tasks such as farm work, clearing land and planting trees.

[…] The urban-rural divide [deep across China] is even deeper in Xinjiang, where different ethnic groups don’t even share a common language. Most of the Uighurs in Mr. Zhao’s village don’t speak Chinese, the Global Times said. The officials, who had to communicate through “body language and eye contact,” presumably don’t speak Uighur either. [Source]

While on his presidential trip to Xinjiang, Xi laid importance on the need for Uyghurs to learn Mandarin. Earlier this week, Andrew Jacobs reported that a Uyghur poet and linguist was detained last August for “illegal fund-raising” while raising money to open a chain of Uyghur-language schools in Xinjiang.

Reports surfaced today on three officials, all ethnic Han, who were killed in Xinjiang during President Xi’s trip to the region and prior to the bomb attack in Urumqi. Again from Andrew Jacobs at the New York Times:

The police in the troubled far-western Chinese region of Xinjiang are seeking assailants who killed three government officials late last month, an act of violence that appears to have been timed to the visit of President Xi Jinping, Radio Free Asia reported on Thursday.

The three victims, all from China’s dominant Han ethnic group who had gone fishing on a lake in Kashgar Prefecture, were slashed and stabbed to death on April 27, the same day that Mr. Xi arrived for a four-day tour of the region, the news service said.

[…] The attack on the three government officials has not been reported in the Chinese state news media, and references to the deadly violence on social media have been quickly deleted. In one posting, three women who said they were widows of the slain men asserted that the local authorities had pressured them to bury the bodies quickly in an attempt to limit fallout from the incident.

Reached by telephone, public security employees in Kargilik County, where the men were reportedly killed, and the nearby city of Kashgar said they were unfamiliar with the case. [Source]