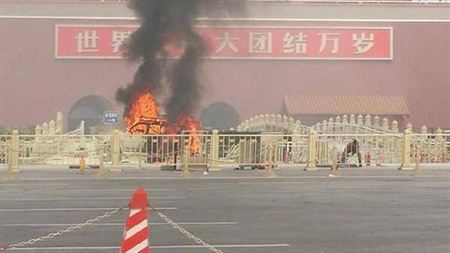 Three people have been sentenced to death for planning the attack on October 28 near Tiananmen Gate, in which a car plowed into the crowd and killed two people, as well as the three assailants. From Reuters:

The Xinjiang Intermediate People’s Court also handed a life sentence to one suspect, among eight put on trial for allegedly planning the attack.

Four of those received sentences ranging from five to 20 years in jail, state television said on its official microblog.

The trial started on June 13, and the sentence came out today, said CCTV. It identified two of the accused with names that sounded Uygur, the largest ethnic group in the violence-racked region of Xinjiang. [Source]

Since the October attack, a string of violent attacks in Xinjiang have instigated authorities to launch a security crackdown in the region. Today, three knife-wielding assailants injured four people at a chess parlor in Hotan. Two of the attackers died. From Reuters:

Four people were injured in a struggle with the attackers in Sunday’s incident in the city of Hotan, but their lives were not in danger, China Central Television (CCTV) said. Two of the attackers died from serious injuries and a third was arrested.

Armed police arrived in just over a minute and overpowered the attackers with the help of chess players.

Chess halls throughout China are thronged by customers who can spend hours drinking tea and playing cards, chess or other games. The motive for Sunday’s attack was not immediately clear. [Source]