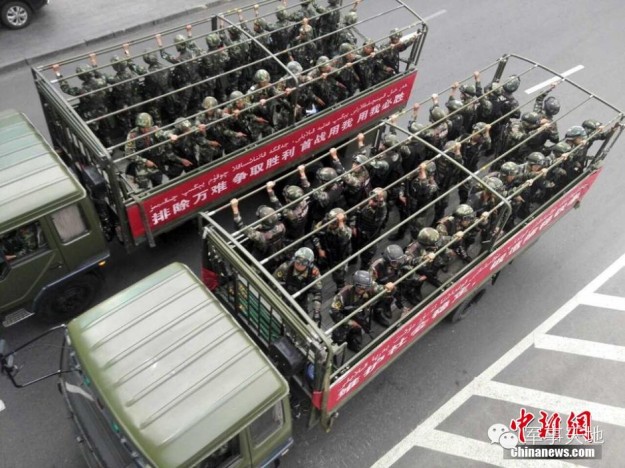 After the violent attack that left dozens dead at an Urumqi market last Thursday was blamed by the government on suicide bombers—the most recent in a series of attacks throughout China, many of which similarly labeled acts of “terrorism” and attributed to “Xinjiang separatists”—state media announced that a “year-long, ultra-tough, unconventional” crackdown on terrorism was underway. While security has been tightening throughout the country in the wake of recent attacks, an official from China’s Ministry of Public Security has said that Xinjiang would be the “main battlefield” in the new campaign. Yesterday, The Guardian’s Tania Branigan reported that China has detained over 200 suspected militants and broken up 23 extremist groups over the past month:

The news came as authorities said a year-long anti-terrorism crackdown would require “unconventional measures”, and the region’s party chief, Zhang Chunxian, announced a “people’s war” against terrorism, following one of the most deadly attacks in years [the attack in Urumqi last Thursday].

[…] Chinese authorities blame separatists with ties to international terrorist networks for fomenting violence, while critics argue that the roots of the problem lie in the widespread alienation among region’s Muslim Uighur population, which is resentful of religious and cultural controls, Han Chinese migration and being left behind by rapid economic development.

Those seized in this month’s raids were captured in Hotan, Kashgar and Aksu – all in southern Xinjiang – according to state news agency Xinhua. The state-run Global Times newspaper said most were apprehended on Sunday.

“Many of the suspects were in their 20s and 30s, who watched terror video and audio through the internet and electric storages and learned how to make explosives. They exchanged their experiences of making explosives and propagating jihad through chatting tools, text messages and illegal preaching sites, according to the department,” said Xinhua, adding that more than 200 explosive devices were found. […] [Source]

More recently, the South China Morning Post reports that authorities have declared a “major victory” for anti-terror in Xinjiang after detaining 5 suspects and seizing nearly 2 tons of explosives near Hotan, southwestern Xinjiang:

The planned attack, allegedly to be led by Abuliz Dawut, was said to have been modelled on the deadly explosions that rocked an open-air market in Urumqi last week, according to the Xinjiang Daily.

The gang were reported to have planned to drive into crowds before detonating their handmade explosive devices. The police also found the suspects travelled to Urumqi and other mainland cities to purchase explosive material. […] [Source]

As minor victories are claimed in the newly launched Xinjiang crackdown and some netizens call for increased punishments against suspected terrorists, Xinjiang expert Michael Clarke warns that increasingly heavy-handed crackdowns in Xinjiang may only serve to worsen problems that many see as being rooted in Beijing’s policies in the region. From the Wall Street Journal:

[…] Professor Dru C. Gladney argued over a decade ago that China faced the prospect of Xinjiang becoming its West Bank if it failed to address the problems stemming from its forceful attempts to integrate the region. He argued that if Beijing did not develop policy options besides “repression, restriction and investment,” millions of Uighur could become marginalized to such an extent that they could look to “the intifada, the Taliban or al Qaeda for inspiration.”

[…] Since the 1990s, Beijing has implemented an immense state-led modernization strategy, funnelling billions of dollars into construction and infrastructure to connect Xinjiang’s economy with the rest of the country and with neighboring Central Asia on the assumption that the delivery of economic growth will dampen Uighur discontent. But this has exacerbated Uighur disaffection by encouraging further Han Chinese settlement of Xinjiang, followed by growing interethnic and urban-rural economic inequalities. The state has also continued to rely on its full coercive powers to repress Uighur opposition and monitor Uighur religious and cultural practices.

The majority of Uighur grievances against the state stem from the effects of uneven economic development and Beijing’s reliance on repression to deal with dissent. But Beijing can’t acknowledge that its “repression, restriction and investment” strategy is a root cause of Uighur discontent without undermining its hold on Xinjiang. Its treatment of Uighur scholar Ilham Tohti is illustrative. Mr. Tohti, a moderate voice who has advocated for greater autonomy for Xinjiang, was arrested in January for “inciting separatism” in his role at Beijing’s Minzhu University.

[…] Tohti’s treatment indicates how little political space exists for the majority of Uighurs to engage with the state about the future of their “autonomous” region. And recent events suggest that what little space remains will likely be narrowed further—a development that could provide fertile ground for the spread of extremism. [Source]

Read more about jailed Uyghur scholar Ilham Tohti via CDT. Recently, Chinese military scholar Zhao Chu compared Xinjiang to Chechnya [Chinese], arguing that policy has provoked Xinjiang terrorism in an essay that was quickly forbidden by Beijing’s censors. While Beijing isn’t as willing to admit policy faults, it has seemingly acknowledged that inequality may be part of the issue. In addition to the “ultra-tough, unconventional” crackdown, the CCP has also vowed to improve living standards in restive Xinjiang. From the New York Times:

Days after a deadly blast in Xinjiang killed scores of people in a busy market, China’s ruling Communist Party vowed to increase employment and educational opportunities in the region, in a sign that it recognizes that it must improve living standards for the region’s ethnic Uighur minority to combat an increasingly violent separatist movement.

The Politburo, the group of 25 people at the top of the 82-million-member ruling party, said on Monday that its policy toward Xinjiang, including its crackdown on separatists and its emphasis on maintaining stability in the region, “have been proved completely right,” the state news agency Xinhua reported. Yet at the same time, it promised that every family should have at least one person with a job, and it announced plans to build more schools.

[…] Following Thursday’s bombing, the deadliest this year, China promised a “strike hard” campaign against separatists in Xinjiang, adding to an already heavy police presence in place since riots in Urumqi in 2009 killed at least 200 people. The government says the attacks are influenced by foreign jihadist groups, often naming the Pakistan-based Turkestan Islamic Party. Yet Monday’s announcement also reflects the acknowledgement on the government’s part that discontent among the region’s Uighurs cannot be solved by force alone, and that Uighurs need to feel they are benefiting more from China’s rising prosperity.

The economic condition of the Uighurs as an ethnic group is hard to measure. In a country where there are statistics for almost anything imaginable, including the average size in square meters of farmhouses in Zhejiang Province, the government does not regularly publish figures on incomes in Xinjiang broken down along ethnic lines. […] [Source]

While state media claims an early victory and the foreign press keeps Xinjiang in the spotlight, read longtime Xinjiang resident and blogger Josh Summers (@farwestchina)’s account of life in Xinjiang as the new security crackdown begins.