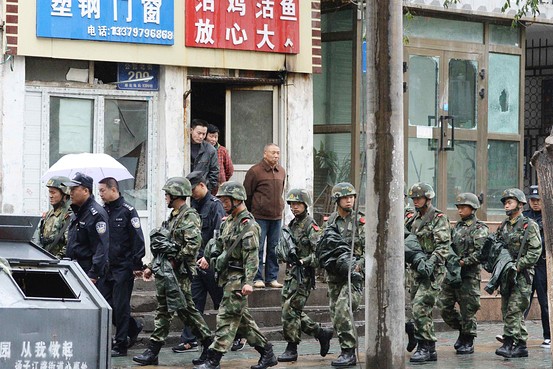 China’s state media reports that five suicide bombers carried out the attack which killed 31 people at a market in Urumqi, Xinjiang, on Thursday, outraging those who live there.  From Michael Martina at Reuters:

The incident, which occurred in Urumqi on Thursday morning, was the second suicide attack in the capital in just over three weeks. A bomb and knife attack at an Urumqi train station in late April killed one bystander and wounded 79.

The government recently launched a campaign to strike hard against terrorism in Xinjiang, blaming Islamists and separatists for the worsening violence in the resource-rich western region bordering central Asia. At least 180 people have been killed in attacks across China over the past year.

The attackers ploughed two vehicles into an open market in Urumqi and hurled explosives. Many of the 94 people wounded were elderly shoppers, according to witnesses.

“Five suspects who participated in the violent terrorist attack blew themselves up,” the Global Times, a tabloid run by the People’s Daily, the official newspaper of the Chinese Communist Party, reported on Friday. [Source]

Didi Tang at The Associated Press describes the reactions of survivors after the market attack:

“It was so fast, it was like a plane flying,” Li, 70, said Friday at a hospital where she was being treated for a broken hip.

The assailants set off more fiery blasts, and all together 43 people were killed and more than 90 wounded in Thursday’s attack, the latest — and bloodiest — violence in China’s far northwestern Xinjiang region in recent months.

A day after the attack in Xinjiang’s capital of Urumqi, survivors told of their terror and said they no longer feel insulated from a long-simmering insurgency against Chinese rule, which has struck their city twice in recent weeks.

Mrs. Li’s daughter said the danger of violence was now a much greater factor in the daily lives of Xinjiang’s ethnic Chinese population.

“The violence used to be distant, but now I have my mother lying in the bed suffering. The danger is right here with us and we dare not go out,” said the daughter, who declined to give her name. [Source]

Bloomberg reports on China’s enhanced security in the aftermath of the attacks:

The Chinese government tightened security at kindergartens, parks and malls in the Xinjiang region after a series of explosions killed 31 people, China National Radio reported.

Police patrols have been stepped up, while the city of Urumqi, where yesterday’s attack occurred, limited parking near schools, reported the government news portal Tianshan.net. The U.S. embassy in Beijing told staff to defer personal travel to the northwestern region, according to an e-mail alert.

The government has stepped up security in a bid to head off further attacks amid concern that it’s unable to halt violence in Xinjiang. The explosions yesterday followed a bombing at the Urumqi train station last month that killed three people. President Xi Jinping pledged to severely punish the attackers and “spare no effort” to maintain stability. [Source]

At Deutsche Welle, read Alim Seytoff of the Uighur World Congress’ testimony that “the area is witnessing a violent response to China’s 65-year-long ‘brutal repression’ of Uighurs.”  Meanwhile, the official Xinhua News Agency (via The Global Post) says the attacks are evidence of “indiscriminate malice against society and all human beings”.  Read more about violence in Xinjiang via CDT.