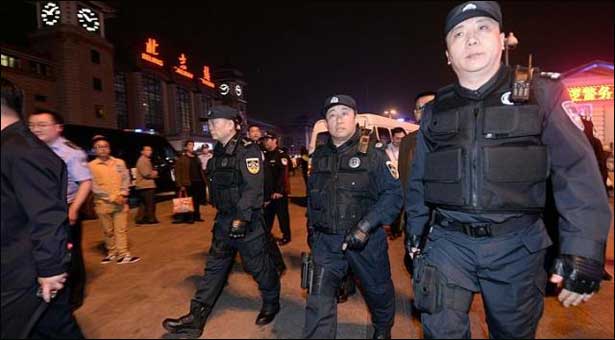 Following recent episodes of violent attacks in the country that have been labeled by state media outlets as acts of “terrorism” attributed to separatist groups in Xinjiang, the Chinese government is now launching a crackdown on Internet content that promotes terrorism and violence. ABC News reports:

The official Xinhua News Agency said police will scour the web for material promoting jihad or teaching bomb-making techniques and other methods of violence. It said filtering will be strengthened and webmasters ordered to police their sites or face being punished.

Xinhua said virtually all those taking part in recent attacks have been exposed to extremist content. It said Xinjiang separatists have recently flooded the Web with such material, raising the challenge to authorities and the risk of further attacks.

“Terror video and audio products have become a major instigator of the high incidence of terrorist activities at present,” Xinhua said, quoting a statement from the government’s State Internet Information Office. [Source]

Authorities will work to prevent terrorist materials produced overseas from being disseminated in China and punish website servers that fail to cooperate. Reuters reports:

The government aims to stop circulation in China of terror-related materials made overseas, remove such information from the Internet, punish websites that break the rules and urge Internet firms to “uphold their responsibilities”, Xinhua said.

[…] China faces a serious challenge cleaning the web of such content, as the volume of materials released by the East Turkestan Islamic Movement — the main terror group in China’s eyes — has increased dramatically, the report added.

“These materials, which propagate jihad, terrorism and religious extremism, have been spread incessantly in China,” the statement said. “They have had a strong instigation effect and are extremely harmful.”

It is unclear how broadly the government will define terror-related content. [Source]

Sina, Baidu, Tencent, and other prominent Chinese Internet giants have joined the fight against extremist online content. From Shanghai Daily:

More than 30 websites including Sina, Tencent, Baidu and Taobao signed a letter of commitment on Friday to take their responsibilities regarding anti-terrorism and deleting terror information.

The company has started training its staff to recognize and delete terror-related content to safeguard cyber security, she said, adding that more than 800 pieces of information containing terrorism have been deleted.

The Internet campaign follows a wider security crackdown in Xinjiang and elsewhere in the country.