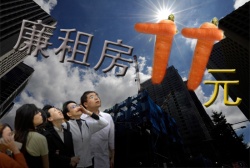 A reference to former Chinese president and CCP general secretary Hu Jintao. On December 30, 2010, CCTV repeatedly broadcast a conversation Hu had with a mother and daughter while he was visiting a housing project in Beijing. Hu asked the two how much they paid in rent every month and if they were able to manage paying that amount. The mother answered that their rent was 77 yuan (approximately USD$11.00) and added, “We’re able to manage [paying the rent] thanks to the good policies of the Party and of the government.”