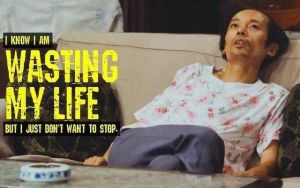 Actor Ge You, from China's first sitcom "I Love My Family," has been coopted by the lie-down crowd (source unknown)