The two police officers carry a sign reading, "temporary." The person on the right is saying, "Can I temporarily throw this brick at you?"

After popular outcry, the two police officers were retried and both received eleven year sentences. The court's remarks also inspired netizens to add a new animal to the pantheon of mythical creatures: the scale-corpse ape (鳞尸猩), whose name is homophonic for “temporarily” in Mandarin. 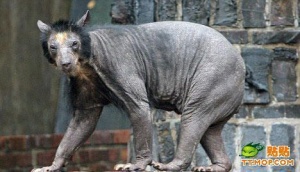