In February 2012, Wang Lijun, who was then the police chief of Chongqing fled to the U.S. consulate in Chengdu to allegedly seek asylum. Following his departure from the consulate, Wang was immediately seized by security agents and reportedly taken to Beijing. Chongqing municipal government information offices stated that Wang was “seriously indisposed due to long term overwork and intense mental stress" and that he was undergoing “vacation-style therapy.”

Sign in the upper left-hand corner reads "vacation style therapy." The characters on the sleeve of the person being smothered are "the truth." Clipboard reads "the Wang Lijun incident." 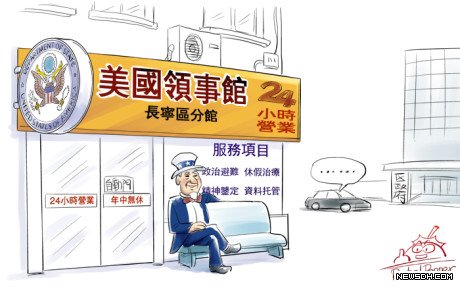