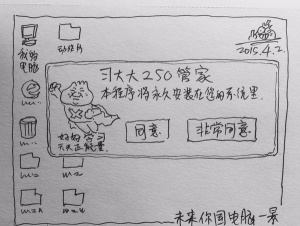 Play on "my country" (wǒ guó 我国), a common reference to China.