As part of a concerted effort to promote his image to the social media generation, President Xi Jinping has released a mobile app that includes text of his speeches, news reports, maps of his travels, and more—a quasi “little red book” for the digital age.

A mobile app has been released that provides free access to complete writings of Xi Jinpinghttp://t.co/BRjgwRgcS7 pic.twitter.com/kNYbxP30OC

Created by a website run by the Central Party School of the Communist Party, the new, free app offers intensive lessons on Mr. Xi. It has 12 features including texts of his speeches and books, news reports, analyses from experts and a map that traces his travels.

“Everyone who uses this app can find their own interests,” Chen Jiancai, an editor with the app, told The Beijing News.

Anyone expecting Fruit Ninja-style fun, like a game where players blast corrupt officials, for instance, will be disappointed. The app is dutifully serious, combining the excitement of watching state television news with the pleasures of reading commentaries on deepening reform.

The app is called 学习中国 (Xuexi Zhongguo), which translates directly as “Study China,” but it is also a play on Mr. Xi’s surname, and can mean “Study Xi’s China.” [Source]

For his latest cartoon, Badiucao reimagines a revolutionary propaganda poster promoting the “little red app.” The caption at the bottom reads: “Resolutely download the Quotations of Chairman Xi app!” The faces are images of steamed buns, in reference to the president’s nickname of “Steamed Bun Xi”; the mobile devices being held aloft are emblazoned with 习， Xi’s surname which also means “study” in the app’s title. Wordplay has been frowned upon in advertising and broadcasts, but is apparently acceptable in official apps.

CDT is now selling t-shirts and iPad covers with Badiucao’s image in our Zazzle store. All proceeds from the sale of this shirt will go to Badiucao and CDT. 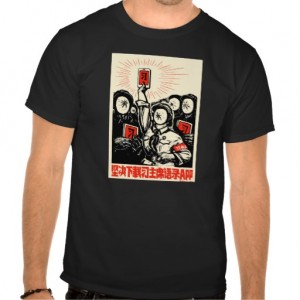 For an alternative to Xi Jinping’s digital efforts, we recommend CDT’s iOS app (also free!), which can be downloaded now at the app store.

Read also a CDT Q&A with Badiucao in which he discusses his artistic and personal influences. All Badiucao cartoons for CDT are available here. See also more exclusive CDT t-shirts with a Badiucao design, for sale in our Zazzle store.