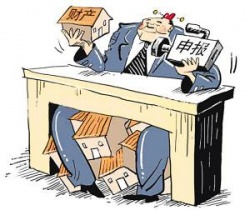 Cai Bin holds one of his properties in his right hand and a video camera labeled “official declaration” in his left. His hoarded properties are piled under his desk. (Sina)

After online muckrakers found evidence that Cai Bin, an urban management official in Guangzhou’s Panyu district, owned 21 properties despite his earlier claims to owning only two, a probe was launched into the high-ranking local official. As news spread, netizens dubbed Cai “Uncle House.” In September of 2013, Cai Bin was sentenced to 11.5 years in prison.

Uncle House is but one local official to be prosecuted for corruption under Xi Jinping’s pledge to fight corruption at all levels. More infamous is Watch Brother, the Shaanxi official who was sentenced to prison after netizens found evidence that he had a collection of designer watches worth a sum far surpassing his official salary.