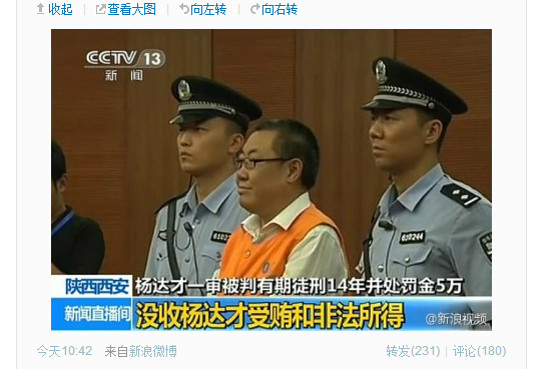 Last August, Shaanxi Provincial Work Safety Administration Chief Yang Dacai became the target of netizen scorn after he was photographed smiling at the scene of a road accident. Internet users soon dug up photos of Yang wearing expensive watches that cost far more than he could afford on his public salary. Yang has now been sentenced to 14 years in prison on various corruption charges. From the South China Morning Post:

Yang was accused of having property worth US$820,000 from unexplained sources and accepting 250,000 yuan in bribes, state broadcaster CCTV said.

He did not object to the charges and was also fined 50,000 yuan.

The trial followed an investigation by the ruling Communist Party’s discipline inspection commission, which found Yang guilty of “inappropriate ‘smiling face’ behaviour” and dismissed him from his post. [Source]

At his trial, observers noticed that even upon being sentenced, Yang continued to smile. The Wall Street Journal’s China Real Times reports:

After confessing to having fallen into the “abyss of criminality,” according to the report, Mr. Yang said it was “too late for regrets,” adding: “In admitting my guilt and showing repentance, my fervent wish is that the court will give me the opportunity to once again be an upright person.”

In addition to the prison time, Mr. Yang will be fined 50,000 yuan and forfeit all of his family’s ill-gotten assets, state media said.

The paunchy ex-official’s crimes register as a minor tremor on the Richter scale of Chinese corruption, particularly compared with former Communist Party high-flier Bo Xilai, who faced charges of bribery, corruption and abuse of power last month in one of the most sensitive trials in Chinese history. Mr. Yang’s sentencing nevertheless garnered significant attention online Thursday, thanks in part to his apparent inability to avoid grinning at inappropriate moments.

“How can this man, at this moment, still be smiling?” e-commerce entrepreneur Wang Juntao wrote on Sina Corp.’s Weibo microblogging service, attaching a photo of Mr. Yang appearing to grin while speaking in court. “It really is a bit abnormal.” [Source]