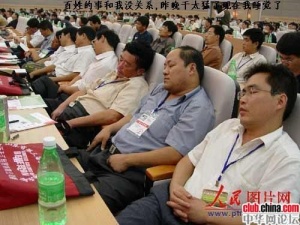 In the "mystical country," government officials can absorb information at meetings while asleep. (Source: club.china.com)

China, a country which seems to defy the laws of nature; a virtual throwing up of hands at aggravations and tragedy in China.

Yuerujinyuan (@月如晋元): The outpouring of grief after the Tianjin explosions, I think it's too much. I just want to say, for this kind of explosion to happen in a city in good working order—this is really and truly a mystical country. (August 13, 2015)

Duanguifa (@段贵发): Doesn't this mystical country get the joke? Is it worth jumping for joy over a fallen tiger? Wake up! Did your taxes go down? Did your rights go up? Can you vote? Did your social status change? Can you speak the truth? Nothing has changed. The root of corruption is still there, and all we have is shit and an unstoppable succession of maggots! (July 30, 2014)